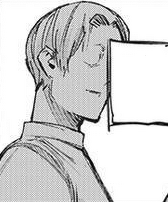 Chapter 123
Seidou Takizawa's father was the unnamed patriarch of the Takizawa family. He was the husband of Michie Takizawa, and the father of Investigator Seidou Takizawa and Seinan Gakuin University student Seina Takizawa.

Little is known about his personality, other than his love of playing Golf.

At some point in the past, an elderly neighbor named Satou was killed by a ghoul. This incident inspired his son to become a Ghoul Investigator.

On the day that his son visited, Michie explained that he'd gone out to play golf. [4]

At some point after his son was abducted by Aogiri Tree, he was killed along with his wife. Their remains were then prepared, and secretly fed to their son by Dr. Akihiro Kanou, who revealed the truth afterwards. This revelation was a major blow to Seidou's mind, causing him to abandon his humanity. [1]

While unhinged as a result of using his incomplete kakuja, Seidou began apologizing to his parents for having devoured them.