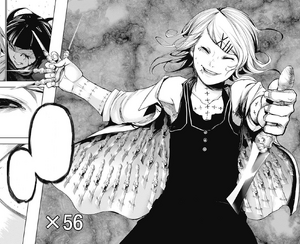 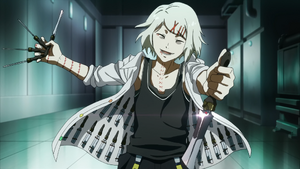 Episode 17
Scorpion 1/56 (サソリ1/56, Sasori 1/56) is a bikaku quinque that takes the form of a throwing Knife. It is a set of 56 blades that can be used both as melee and throwing weapons. They are currently wielded by Juuzou Suzuya. Suzuya is skilled at throwing them with perfect aim and uses two or more at a time during an encounter with an opponent, often throwing several in the air to catch before striking. He keeps the blades in his shirt.[1] After the timeskip, he keeps these blades inside his prosthetic leg.[2]