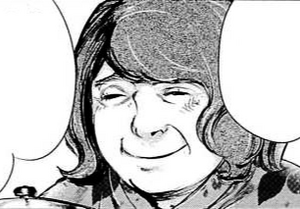 Chapter 70
Satou (佐藤, Satō) was a neighbor of the Kirishima family around the time when Arata Kirishima was caught by Yukinori Shinohara and Kureo Mado where she later sold out Touka Kirishima and Ayato Kirishima to the CCG.

Satou was a stout middle-aged woman with shoulder-length curly hair.

She usually wore a dress with flowers printed on it.

Satou was a kind woman who shows concern for her fellow neighbors. She was fond of the Kirishima family as she gave them human food on a regular basis. However, her pretense was revealed after Arata Kirishima was taken by the CCG. To prove that Touka Kirishima and Ayato were ghouls, she forced them to eat human food; thus selling them out to the CCG.

Satou was a neighbor of the Kirishima family where she regularly gave them cooked dishes such as meat and potato stew, and donated a cage for their pet sparrow Chunta.[2]

After Arata Kirishima had been caught by the CCG, Satou lured Touka Kirishima and Ayato Kirishima in her apartment. To uncover their suspected ghoul identity, she forced Ayato to eat human food when the siblings refused her offer. Bureau investigators appeared from inside the apartment to capture the siblings. However, the siblings were able to escape, for Touka activated her kagune for the first time and used it against one of the investigators.[3]