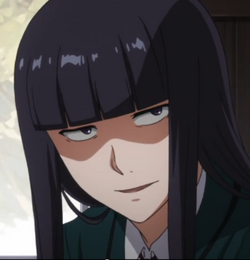 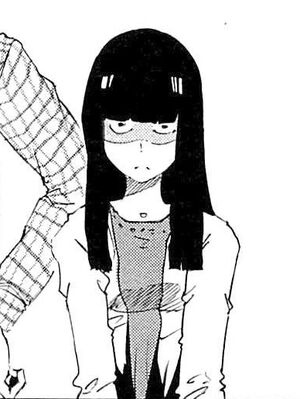 Kanae Itō
Sankou (三晃, Sankō) is a student at Kamii University, and a member of the Occult Research Club. She is a ghoul blending into human society, and was blackmailed into helping Cain hunt fans of the occult. After his death, she was able to resume her normal life.

Shuu Tsukiyama referred to her as Miss Ikaru (ミス・イカル, Misu Ikaru) while they were both students of Seinan Gakuin High School.

Sankou is a rather plain young woman, with straight black hair in a traditional Japanese style. She wears comfortable clothing, with long shirts and usually has a sour expression.

Sankou is a fairly quiet girl, good at observing others and gaining plenty of knowledge this way. She is an excellent source for information, sharing gossip or the results of her investigations with those she respects.

Sankou overhears the conversation between her classmate and their teacher, Matsumae. When Tsukiyama returns to class, she inquires about it and learns that Chie Hori had managed to photograph him feeding. She's surprised that he never heard of the strange girl before, since her behavior has made her famous around the campus. Sankou briefly discusses how famous Tsukiyama himself is around school, as the handsome and gifted heir to a major business empire. She suggests that Tsukiyama never noticed Chie, in spite of how loud she is, because such a person simply wasn't an interesting meal. She also explains to Tsukiyama that Chie can afford such expensive equipment because she sells her photographs online.

Several years later, Sankou meets Hideyoshi Nagachika while investigating the Occult Research Club's latest topic — ghouls. Along with Kiyama, she interrogates Hide about the possibility that Ken Kaneki is a ghoul. In order to deter their investigation, Hide joins the club and tries to steer them away from suspecting his friend. During a meeting, the club members introduce him to Cain, a prominent Occultist.

Under his leadership, the group settles on following Kaneki during nighttime hours. During their stakeout, Cain leads the group through a series of alley ways and gets them lost. Revealing himself to be a ghoul, he attacks the group and ends up chasing Hide right into the path of patrolling ghoul investigators. With Cain safely out of the way, Sankou ambushes Hide and knocks him unconscious, thanking him for his help. The group later awaken at Kamii University, unharmed and allow Kiyama to assume they'd had some sort of "supernatural experience".

After Hide conceals snacks in Kaneki's backpack, Sankou takes his name off the list of suspected ghouls.

Sankou meets with Touka Kirishima and Kaneki at the library, greeting them both. She reveals that Cain had been blackmailing her into working with him, and warns Kaneki to be careful about Hide.