The S3 Squad (S3班, Esu-san-han) is a special unit within the Commission of Counter Ghoul, handling the highest priority assignments and the most dangerous targets. It is considered an illustrious assignment, with considerable honors involved.

The S3 squad is deployed for special assignments, including the defense of important locations such as the CCG Main Office. It is also charged with carrying out Whack-a-mole operations in the 24th ward, and facing high-rated targets such as the One-Eyed Owl.

Over the years, several prominent Special Class Investigators have headed the S3 Squad. 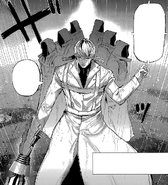 S3 during the Owl Suppression Operation. 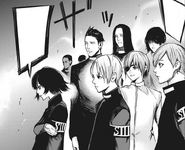 The current line-up, under Juuzou Suzuya.