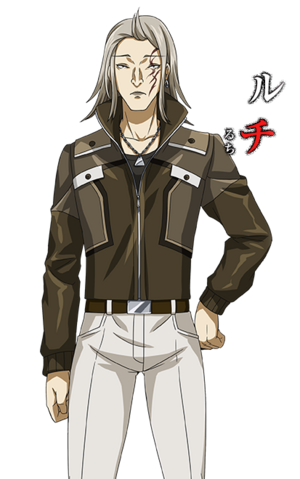 Known by his alias Ruchi (ルチ, Ruchi), he is a former top brass of the Black Dobers, and a suspect in the hunt for Jail.

During the time of the feud with the Devil Ape, Ruchi acted as the close aide of Kaya Irimi. He was strongly opposed to Kaya's working for Yoshimura, reconciling with Koma and working at Anteiku, so he, then about 19 years old, left the Black Dobers along with his subordinates. Still holding a sense of respect, he wishes to lead the Black Dobers once more. (By gathering comrades, is he making arrangements so that Kaya can go on a rampage at any time?)[1]

Ryuuchi is a gaunt young man with long blond hair, narrow eyes and pale skin. He wears a multi-tone brown jacket, black undershirt and white pants. His accessories include a chain necklace with a triangle shaped pendent and a left loop earring. He has a tattoo that goes horizontally down his left eye that looks like a stylized lightning bolt or barbwire.

Ryuuchi stomps on his victim.

Ruchi was maybe the only male member of her gang in the past, and seems to have answered her call when she reassembled the gang during the Owl Suppression Operation. As such, it is likely that their relationship was positive.