Edit
watch 01:05
Who is Ryouko Fueguchi?
Do you like this video?
Play Sound 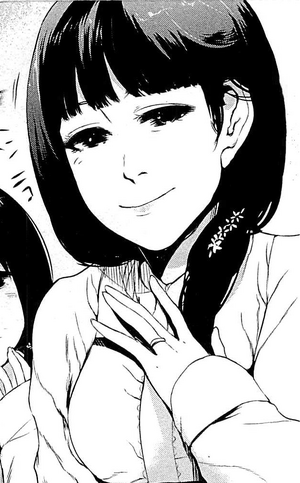 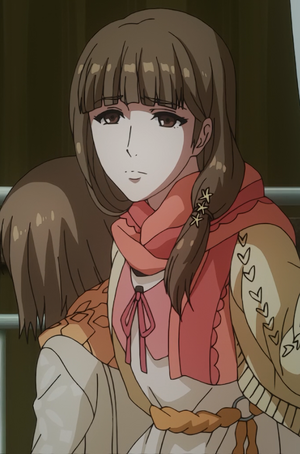 Ryouko was a slender and fairly tall woman with chest-length brown hair that was loosely tied towards the left side of her shoulder with three flowers ornamenting it, brown eyes and a kind face with caring eyes that Hinami Fueguchi also possesses.

She wore a pale, pastel dress tied at the waist with a braided orange belt, a pale, yellow sweater and a reddish scarf.

In the official English translation, she is described by Kaneki as a pretty mother, though some fan translations have instead used the word beautiful.

Ryouko was a gentle woman who preferred not to hunt or kill people despite being a ghoul. She loved her husband very much, as evidenced by the fact that she defended his shady past and insisted that he was a good man. She also loved her daughter, to the point where she told Hinami to run away so that Ryouko could stand up against Kureo Mado. She even relied on her husband for protection of the family. After his death, she mourned, eventually apologizing to Hinami for the burden she put on her husband, as well as endangering Hinami's life. As a resolve, she chose to leave Anteiku and start a new life. Before the moment of her death, she wished for Hinami to live.

Ryouko was first seen with her daughter Hinami Fueguchi, at her husband's clinic. They were forced to hide behind a curtain when Yakumo Oomori barged in and interrogated Asaki Fueguchi. Realizing the situation to be dangerous, Ryouko then went to Anteiku and spoke with Yoshimura concerning the help she needed to acquire prepared meat; since she nor her daughter were capable of hunting on their own. After she learned of her husband's death by the hands of Ghoul Investigators, both Ryouko and Hinami grieved. Later on, she was forced to stay at Anteiku for a while since the doves were searching the entire 20th ward for her and Hinami. She visited Asaki's grave, whereby she buried his ghoul mask, and went back to Anteiku via Renji Yomo's escort.

After Ryouko decided to start a new life with her daughter by her side, she informed Yoshimura that she was leaving Anteiku. That same day, Ryouko and Hinami left the coffee shop and began their journey on foot through Tokyo. Though it was raining, Hinami could still sense the scent of two men trying to track them down. However, in the Anime, this was replaced with the scent of Hinami's father. They accidentally bumped into Kureo Mado and Koutarou Amon; the two doves that were searching for them all along. With nothing left to do, Ryouko was forced to activate her Kagune and tells Hinami to run away, in an attempt to put her life at risk; thus saving Hinami's own. After seeing that she was a powerless ghoul without the mindset to fight or hunt on her own, Mado decided to carry on with the execution; he unleashed his quinque, and while asking Ryouko to say her last words, Mado sliced off her head which killed her before she could even finish her sentence.

Ryouko's kakuhou was later extracted and combined with the kagune of her husband's; to make Mado's newest quinque, Fueguchi Two. She subsequently met her husband in the afterlife.

Because Asaki Fueguchi mainly fought in Ryouko's stead and she didn't hunt humans, she was not accustomed to combat.