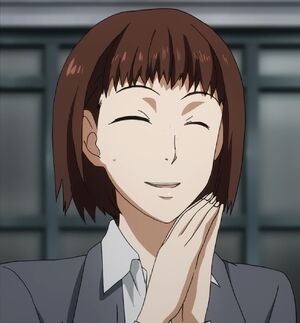 Ruisawa is young woman with average height and shoulder length straight dark hair. She wears a light-colored striped suit with a darker shirt underneath it. She also has freckles around her nose and she appears to have her eyes closed.

Ruisawa is cheerful with an ever present smile. As a human, she does not consider ghouls to be like humans, happily expressing her apathy about ghoul children being killed.

After being turned into a ghoul, however, she expresses extreme desperation and panic when caught feeding on a human corpse.

When Ken Kaneki and Touka Kirishima went to give false information about a ghoul at the CCG, Ruisawa was the one who spoke with them. After giving her the false information, they asked her how the investigators fought the ghouls, since they were a lot stronger. Ruisawa said that she could not reveal that information, but said that two strong investigators had come to their branch and killed the Mother ghoul and will soon find the Daughter ghoul as well. Touka said that must be heartbreaking to kill a child, but Ruisawa, still with a smile, told her it was not like that, since ghouls were not humans and since they will cause them trouble, it was natural for them to kill the ghouls. After that, Touka and Kaneki left.[1]

She later attended Ippei Kusaba's funeral in the branch's hall.[2]

When Sen Takatsuki went to the CCG 20th ward branch office to divulge information on Kanou's Underground Laboratory, Ruisawa tried to discuss that information with her. However, Takatsuki demanded that a ghoul investigator speak to her.[3][4]

Ruisawa was one of the humans to be affected by Dragon's spores, causing her to turn into a ghoul. Kaneki, Kuki Urie, and Saiko Yonebayashi stumble upon her consuming a corpse before she looks up at them in fear and begs them not to kill her. She quickly runs off immediately after.

It is unknown what happened to her after this, but she was most likely assisted by the TSC and allowed to live without killing humans like other ghouls.

As a human, Ruisawa possesses a normal human's strength.