Edit
watch 01:05
Who is Roma Hoito?
Do you like this video?
Play Sound 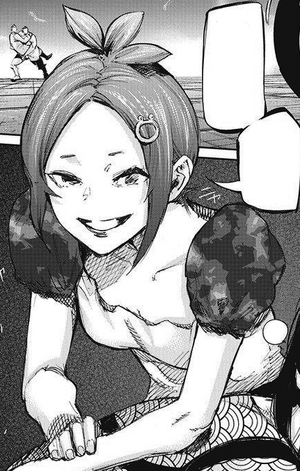 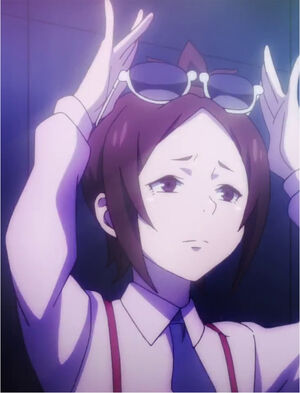 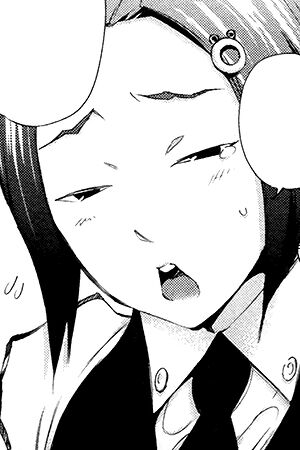 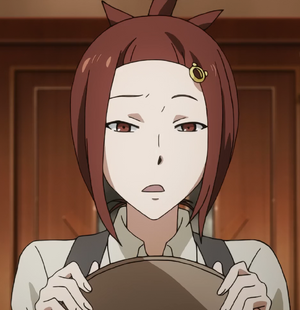 Roma Hoito (帆糸 ロマ, Hoito Roma) was a ghoul who once infiltrated the Anteiku for the Clowns, among whom she was nicknamed Gypsy (ジプシー, Jipushī).

Roma was the founder of the Clowns, information that she kept secret from others as part of her "game". Although young and fragile in appearance, she was in fact the Dodgy Mother (ダッジマザー, Dajjimazā), an extremely powerful ghoul who faced Tsuneyoshi Washuu in her early years.[1]

Roma had a slim build and a childlike demeanor, she frequently wore her red hair in a spiky bun with bangs framing her face.

While posing as a waitress in Anteiku she wore the standard uniform, but as a Clown she wore circus-themed clothes.

Roma's ghoul mask was a clown-themed mask that covered the upper half of her face. It resembled a cartoon depiction of a rabbit or some sort of rodent, with a round nose and protruding incisors. The mask sports two large circular drawn eyes, with a star around the left eye.

Roma during her youth. 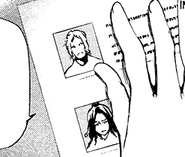 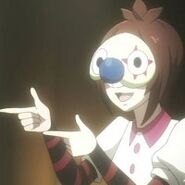 Roma at first appeared to be a clumsy and absent-minded woman who was often scolded by Nishiki when she broke dishware at Anteiku.

As a Clown her personality was more sadistic and uncaring, shrugging off Kaneki's disappearance, saying that she desired a more 'depressing' scene and gleefully auctioned off innocent humans. She described Kaneki after the Aogiri incident as "beautiful," and found his perseverance very attractive.

During the CCG's auction raid she showed no regard for human life and enjoyed toying with the CCG investigators, pretending to be weak and harmless to lure them in, then impaling them with her kagune.

She also seemed to have a certain degree of skill in switching dispositions, as she could go from being ditsy and clumsy, then weak and helpless, to being cruel and sadistic, as displayed when she worked at Anteiku and when she was killing off investigators as a part of the Clowns.

Like her fellow Clown members, she tended to crave chaos and destruction, as shown how she created the Clowns, merely for the sake of easing her boredom by stirring chaos. Roma was shown to have an immense hatred and jealousy towards humans; she envied humans because they could lead normal and joyful lives that she never could.

When Roma first became self aware, she realized that she was all alone. As a child, Roma had no memory of her parents and was forced to provide for herself. She managed to survive and subdue her hunger by eating rotting flesh until she was seven. Her sudden desire for fresh meat however, led her to killing her first human at the age of seven, marking the start of her life constantly in the presence of death. She killed and ate other ghouls for their territory or out of boredom. She continued to shed the blood of both humans and her own kind until eventually she gained a certain recognition among even the strongest of them and mass murderers. As time passed with no significance, she eventually settled into a state of pure boredom. She lacked a real name and changed her name countless times.

However, this took a turn after her realization that many humans lived lives of depravity and were utterly insignificant. They were hideous and frail, and yet they were joyful. She wanted to slaughter them, force them to live, and get a rise out of them. Roma came to see human society as no more but a circus, a means of satisfaction — in response, she formed the Clowns.

At an unknown point in time, either before or after the Clowns' founding, the CCG named her The Dodgy Mother. Receiving an SSS rating, she ultimately fought against Tsuneyoshi Washuu and was defeated. His victory followed him as one of his most noteworthy achievements.

Eventually Roma was captured and detained in Cochlea by the CCG as the SS-rated ghoul "Gypsy." Meanwhile, neither the CCG nor the Clowns themselves were aware of her leadership, causing her disposal to be postponed. She enjoyed her solitude after her "wild party" and considered the prison her new circus. She remembers Rio being brought into the Cochlea. At night, Shiki Kijima would regularly torture Rio in a nearby cell and she would enjoy his screams. During the Second Cochlea Raid, an executive of Aogiri Tree, Tatara, requested she lend them her strength, though she refused due to their ideological differences. When he decided to attack, she effortlessly evaded him and escaped.

Later, she received a haircut from Uta at the HySy ArtMask Studio. He informed her of a one-eyed ghoul working at Anteiku. After she contemplated becoming a part-timer there, Uta said he would introduce her. He goes on to mention their newest member, Souta, a ghoul investigator. Roma found the new information interesting, and was ready to have her fun.[1]

She transferred to Anteiku from the neighboring 19th ward soon afterward. She claimed to have come upon hearing of Kaneki's act of carnage in the 7th ward's Ghoul Restaurant, hoping she would meet him.[6]

After the Owl Suppression Operation, along with the other members of the Clowns, she celebrated Kaneki's reported death at HySy ArtMask Studio.[7]

Roma and Nico observed the Quinx Squad from a distance and recognized their disguised leader as Haise Sasaki. Disgusted by his apparent happiness and idyllic life, she wished for Haise's "death" to restore the old, troubled Kaneki whom she admired. Her companion criticized her twisted interests, but mentioned the fun they would have at the upcoming auction.[8]

Roma attended the Auction at Zeum hall as part of the entertainment, performing comedic acts along with Ganbo for the amusement of the audience. She was joined on stage by Uta, who served as the auctioneer for the main event. While he auctioned off the human goods, Roma provided mocking commentary and taunted the victims.[9]

When Juuzou Suzuya revealed himself and attacked, Roma quickly fled the stage.[10] She later stumbled across the squad led by Take Hirako and Nobu Shimoguchi, and was immediately attacked by Shunichi Shibashi. Nearly sliced in half, she collapsed and cried for help, luring Shunichi close before killing and eating him. When the rest of the squad attacked, she fled again and hid behind Uta.[11]

She later interfered with Uta and Hirako's fight but Kuramoto Itou, together with Takeomi Kuroiwa, stopped her in time, as ordered by their squad leader. She then immediately attacked Kuramoto and invited him to "play".[12] Before the S3 Squad could enter the fight against them, she escaped with Uta.[13]

Without warning, Roma stabbed Nishiki Nishio through the midsection on Rushima. She approached him with Shikorae, mocking his intentions.[14] She watched in glee as the Aogiri Quinx attacked the outnumbered Nishiki, who she spoke to before being unexpectedly stabbed into the air by Kurona Yasuhisa's kagune.[15] Shikorae checked if she was fine before she attacked Nishiki but was nearly killed by Kurona again, causing her to yell to Shikorae so he would unleash his ukaku. Watching Shikorae attack Kurona and be attacked by Nishiki, she was confident his special kakuhou and multiple Rc types would help give them the advantage. However, she only watched absently as he ran away. Realizing she was alone, she changed her disposition to appear non-threatening.[16] She was captured by Nishiki and Kurona who then went back to the coast to leave the island.[17]

After leaving Rushima, she had remained in captivity, at one point being with one of Kazuichi Banjou's subordinates[18] before Nico had received the "signal" from her detached kagune. He told her she should pick the right time to escape. He was not there to retrieve her however, and told Nishiki, Seidou Takizawa, and Kazuichi Banjou they could do whatever they liked with her.[19]

Roma appeared along with Shikorae in order to assist Kichimura Washuu in killing the investigators who opposed him, so they couldn't live to build their legal case against him. The two ghouls attacked Kuki Urie and Iwao Kuroiwa. She stated to Urie that boredom is the common enemy of both humans and ghouls. She regularly praised Shikorae for his teamwork with her and then assumed her "Dodgy Mother" kakuja form, overwhelming Urie and restraining Kuroiwa.

She then swallowed Urie whole while oddly enough, thinking that between the chicken and egg, the chicken was first. Roma told Kichimura that she was hungry, to which he replied having Kuroiwa as a "Special Class Meal". Before she could continue, Urie framed out and bursted out of Roma's kakuja while trying to tend to Kuroiwa. Shikorae and Roma teamed up against Urie, attempting to overwhelm him. However, he blocked all their attacks with his newly-formed kagune shield, and overwhelmed the two with his blade and shield. Shikorae called it an "abomination of a transformation", causing Roma to call him out for muttering rhymes at that time.

Urie savagely slashed at the two, sending Shikorae flying out a window and beheading Roma. Bidding her farewell to Shikorae, Roma's decapitated head was impaled and mutilated by Urie, killing her for good. The remains of her head were last seen shrivelling up.

They are both members of the Clowns. They attended parties together and would chat casually, indicating a friendly relationship. However, when Roma had been captured, he did not care much for her fate or treatment, even referring to her as an "idiot."

They are both members of the Clowns, and it is assumed they get on well as Souta's been seen tickling her and teasing her about Kaneki. She takes glee in carrying out his orders, especially when there is fighting involved.

Uta and Roma are part of the Clowns group. They are on friendly terms; Uta is slightly concerned about her safety, as shown when he cautions her to watch out against her opponents due to their strength. Familiar with Roma's bored nature, Uta tried to interest her by telling her about Ken Kaneki and Souta.

He was a member of Aogiri Tree, but she arrived on scene with him to help Kanou. He called out to her when she was stabbed by Kurona, seeing if she was okay and she praised his abilities as special. Despite this seemingly mutual consideration, he quickly left her side after being hit and she did not appear to feel betrayed.

She is seen working alongside him again during their battle with Urie and Kuroiwa, and both work off one another well. They refer to each other with nicknames and affectionate terms, indicating a fondness for each other.

Ghoul Physiology: Due to her ghoul nature, Roma had inhuman amounts of pain tolerance and durability, as well as regeneration, a kagune and a kakuja. Her ghoul physiology was so powerful to the point that Roma herself has seemingly retained the physical appearance and vitality of a teenager/young adult despite being the same age as Tsuneyoshi Washuu or perhaps even older.

Roma releases her kagune from her abdomen. 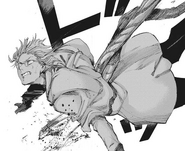 Roma forming a trap with her kagune. 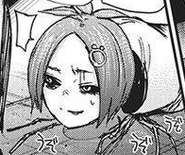