View source
watch 02:01
Who is Rize Kamishiro?
Do you like this video?
Play Sound

"Those cowardly lions have confined themselves in a cage of their own free will. Even though the lion is supposed to be the 'king of all beasts.'"— Rize Kamishiro, Tokyo Ghoul Side Story: Rize

Rize Kamishiro (神代 利世, Kamishiro Rize) was a ghoul and the foster daughter of Matasaka Kamishiro.

Born into the Washuu Clan, Rize was the illegitimate daughter of former CCG chairman Tsuneyoshi Washuu, where, as a child, she escaped from the clan and organization V.

She was known under her nickname Binge Eater (大喰い Ōkui, "Binge Eater" or "Gluttony", literally "Big Eater"). Due to her eating habits, Rize was a threat to most ghouls in various wards in Tokyo before her death in the Steel Beam Incident where her kakuhou was used in the kakuhou transplant surgery to transform Ken Kaneki into a one-eyed ghoul.

Rize later was discovered alive and captured by Dr. Akihiro Kanou where her kakuhou was farmed to transform Kurona and Nashiro Yasuhisa, and Souta Washuu-Furuta into one-eyed ghouls.

Eventually, she was used as the host for the body of Dragon (竜, Ryū), indirectly responsible for the ghoulification of Tokyo, before she was finally put out of her misery at the hands of Ken Kaneki.

Rize appeared to be a slender girl with chest-length purple hair that has bangs swept to the left side, purple eyes, full pink lips and an hourglass figure.

As a ghoul blending into human society, she wore normal attire fit for a young woman, showing a bigger preference for dresses. After she had moved to the 20th ward, she was seen wearing a pair of red frame glasses (the frames being only at the lower half of the lens), even though she did not seem to have any eyesight problems. Her attire revealed some cleavage, possibly to seduce and allure males as her prey. Rize was very attractive and is aware of this fact, often manipulating it to her advantage.

After her transformation into Dragon, Rize had long white hair with decorative marks around a paled face near her eyelids and across her forehead.

In her younger days, she had shorter hair.

Rize as a child. 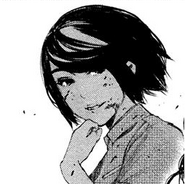 Rize in her younger days. 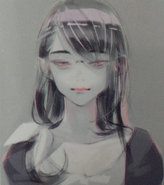 Rize in her younger days.

Rize was a voracious, independent ghoul who acted as a femme fatale to those who fell victim to her charms. She was an enigmatic female with many acquaintances who were left with a mysterious impression of her, and those who came into conflict with her rarely came out alive, with the exception of Kazuichi Banjou, who found her self-dependence and strength attractive. She was extremely selfish who thought little to none of the hardship her binge eating habit caused to other ghouls. She had no ambitions and wandered the wards aimlessly to appease her boredom.

After she was rescued by Renji Yomo, it was shown that the effects of captivity and starvation had reduced her to a near-mindless state as she was unable to recognize her surroundings and had to be kept in restraints. This also brought out a vulnerable side of Rize as she cried out to her foster father in fear.

Born in the Sunlit Garden, Rize was one of Tsuneyoshi Washuu’s illegitimate children and was to eventually become a “womb” to preserve the Washuu Clan bloodline. Disregarded by her family and disgusted at her fate, she escaped with the help of Souta Washuu-Furuta,[7] which left her exhausted and hungry. She was found by Shachi, who decided to take her in his care. She grew close to Shachi, seeing him as her surrogate father. However, as Rize grew, so did her appetite. She began overeating, and despite Shachi's protests, continued doing so. Her actions eventually resulted in a CCG raid in the 6th ward and Shachi's capture.[8]

Rize would then begin living nomadically, drifting through the different wards while continuing her binge-eating habit. Six months before the Steel Beam Incident, Rize lived in the 11th ward. Her activities attracted the attention of the ghoul investigators and made them move into that ward. She decided to leave when the ghoul investigators started to act. Before she left, she killed Hagi, the leader of the ghouls in the 11th ward, and two others.[9]

Rize targeted Ken Kaneki, who noticed that he had a crush on her, engaging a conversation with him after frequenting Anteiku for a while. Using their mutual love of books to her advantage, they planned a date soon after meeting. After a harmless day spent together, Rize tricked Kaneki into escorting her back home down a deserted area where she revealed herself to be a ghoul as she took a bite of Kaneki's shoulder.

Kaneki struggled against her, but Rize was too strong and easily pierced him in the abdomen with her Kagune. Before Rize could finish him off, multiple steel beams from the construction area above fell onto Rize, crushing her. The disturbance was heard by a passerby, who then called for help, and both were sent to Kanou General Hospital. There, Professor Akihiro Kanou pronounced Rize too far gone and decided to transplant her organs into Kaneki without contacting their relatives, given the urgency of the situation.[1] However, he secretly kept her alive to use for his experiments.

In the anime, a hallucination of "Rize" haunted Kaneki when he was hungry and trying to fight his ghoul instincts.

During Yamori's torture sessions, Kaneki began seeing a hallucination of "Rize," who helped him embrace his ghoul side and eventually beat Yamori. It was in this period of time when Kaneki had a flashback about his mother and how she eventually died from over-exhaustion. They conversed about what the "right" thing to do was, until Kaneki denounced his mother's way of life and "devoured" "Rize's" strength.[10][11][12]

Since the accident, Kanou kept Rize alive in a tank to harvest her kakuhou for his research.[13] Kaneki and Shachi eventually met her during their battle. As Kanou tried to persuade Kaneki to join Aogiri Tree, her tank was destroyed and she was rescued by Renji Yomo, per the agreement made between Yoshimura and Shachi to keep her safe.

After the incident at the lab, Rize was kept in a container inside Renji's living quarters.[14] She was restrained by chains and kept in a constant starving state, only fed enough to survive and not enough to regain her strength. This made her mentally unstable and unable to recognize her surroundings. Kaneki eventually found her in this state, which prompted him to reevaluate his decisions.[15]

During the Owl Suppression Operation, Rize appeared as another hallucination to Kaneki in the sewers, but unlike before where she was coherent and humanized, she became a deformed and monstrous entity who tried to eat him.[16]

At some unknown time, Rize's foster father Shachi visited Nishiki Nishio and Renji Yomo, who had been taking care of Rize per his agreement with Yoshimura. Shachi told them that since Yoshimura's capture by his daughter, he could be saved, and urged them to be rid of Rize, as keeping her would be too dangerous for them. As he left, Nishiki asked him why he still cared for Rize. Shachi remarked that it was a stupid question and stated that it was his duty as a parent.[17]

Rize was in the process of her recovery just after Sen Takatsuki announced she was a ghoul.[17]

She is mentioned by Kaiko to have a connection with the CCG Laboratory Division and that it is a classified issue that has not been made public.[18]

Rize reappears later being shown to have been captured and kept in a tank by Kichimura Washuu who uses her as a donor to farm her kakuhou for making Oggai.[19]

Rize later appeared to Kaneki as a hallucination while in his dragon form, calling him a "murderer." She showed him the destroyed Goat base and the people who he killed while he was in his dragon form. Rize also questioned Kaneki's decisions, such as wanting to attack the CCG in order to create peace among ghouls and humans but would result in putting his friends in danger. Kaneki admitted that he only wished to be wanted by someone, which Rize deemed them both selfish. Reminiscing on their first encounter, Rize regrets ever meeting Kaneki but despite her feelings, he bears no hatred.[20]

After Kaneki was freed from the dragon Kakuja, V agents were seen in the 19th Ward accompanied by Nimura Furuta. Underground a flesh-like egg structure from the dragon kakuja burst and revealed a white-haired Rize which Furuta refers to as his "precious dragon.”[21]

After Kaneki defeated Furuta, he climbed the body of Dragon until he reached the core, fighting off huge mouthed kagune's which have hair that resembles Rize's. As Rize herself appears merged with Dragon, Kaneki tells her he will kill her to end the rampage. As a tear rolls down his cheek, he strikes killing her instantly. However, as a result of Rize's demise, the remains of Dragon started to collapse like a landslide. The remains swallowed Kaneki before he could ever escape. Before he was dragged into the darkness, Kaneki heard Rize speaking to him in his apparent hallucination, saying that she was always watching over him.

Rize was attracted to Kaneki because of his delicious appearance and himself. Both of them shared many interests. After their date, Rize tried to hunt him down, but failed. At the end, Kaneki, heavily injured, went to a hospital, where Dr. Akihiro Kanou decided to transplant Rize's organs into him.

A hallucination of Rize appears to Kaneki earlier in the anime, representing the subconsciousness of Kaneki's half ghoul. "Rize" usually haunts Kaneki when he is hungry and needs to eat human meat.

As a child, Rize looked up to Shachi, whom she saw as a father. However, as Rize reached adulthood, her binge-eating habit earned her Shachi's rage, and further strained their relationship, and resulted in arguments between the two.[22] She is implied to have caused her foster father's capture, showing she no longer cares for him. However, in her half-crazed starving state, she apologized to her father. On his side, he still considers her as his daughter.

Furuta and Rize knew each other as children. Furuta helped her escape in order to save her; however, Rize appears to not hold much value about his aid, enjoying the freedom she had gained, and hanging out with other men. Because of this, Furuta punished her by dropping the steel beams on her. It is unknown what she thinks of him at the current time.

Rize was pursued by Kanou to become a donor in his experiments to create artificial one-eyed ghouls. He took an interest in her because her kagune was unusually vigorous, though their history prior to Kanou kidnapping her is unknown. Kanou treated her incredibly inhumanely, imprisoning her and starving her.

Banjou had one-sided romantic feelings for Rize, whom did not care for him at all. He searched for Rize in the 20th ward soon after learning she had supposedly died.

Ghoul Physiology: Living as a ghoul, Rize possessed high physical capabilities along with a rinkaku kagune. Rize was considered strong even among powerful ghouls, and her kagune was well capable of taking down multiple opponents in one go. 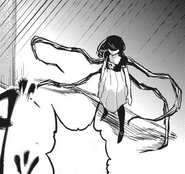