For the canon version of this character, see Shikorae.

Rio (凛央, Rio) is the protagonist of the game Tokyo Ghoul: Jail.

Imprisoned on suspicion of being the ghoul known as Jail (ジェイル, Jeiru), he escapes from Cochlea and hunts for the real culprit.

Rio appears as a young teen with light green hair and purple eyes, dressed in a purple coat with a neon green interior, white and gray striped shorts, a gray shirt, and knee-high boots.

The mask Rio wears depends on the Rc type chosen by the player, providing him with four optional masks. Each one seemed to be suited to his kagune.

When his kakugan becomes activated, jail-bar-like markings appear on his face. Because of these markings, he was given the nickname Jail. 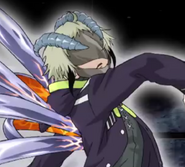 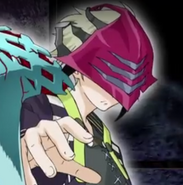 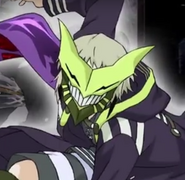 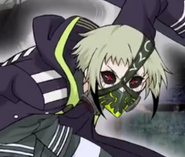 Rio's bikaku mask.
Add a photo to this gallery

In Tokyo Ghoul: Jail, Rio's personality before the "Jail" incident of being imprisoned is unknown, as he has seemingly changed greatly from both his time in Cochlea and Anteiku, casting aside any of his own personal needs, now only focusing on working to find out who "Jail" is and why he was imprisoned instead of Jail.

A part of Rio's personality that remains is that he cares deeply for his unseen "Big Brother" who is thought to be imprisoned in Cochlea by Rio himself. However, he is more psychologically unstable than he appears due to the death of his older brother. Rio descended into a temporary state of madness and rage, killing multiple ghoul investigators, and as a result, gaining the epithet, "Jail."

The Jail incident — the ghoul Jail committed the crime of mass-killing investigators. But there were few eyewitnesses, and no one knew his true appearance.

As one of the suspects of the Jail incident, Rio was charged with the crime and imprisoned in Cochlea.

During the 11th Ward Battle, Aogiri Tree attacked Cochlea and Rio took advantage of the commotion and broke out of Cochlea. Worn out, he wandered the town and was given a warm welcome at Anteiku. He began searching for clues on Jail who was the cause for his imprisonment.

After having caught hold of some information on Jail, Rio approaches the ward that he believed to be Jail's turf. There, he encounters Kaneki, who is eating powerful ghouls and seeking to become stronger. Since they share the goal of chasing Jail, they decide to act together.

Rio first encounters Kaneki while he is pursuing a lead on the mysterious ghoul known as "Jail." As it happens, Kaneki is also pursuing Jail as well, which leads the two to cooperate in order to pursue the ghoul. Rio also meets the cast of Anteiku through Kaneki. Kaneki reminds Rio of his big brother.

As the leader of Anteiku, Yoshimura was the first to welcome Rio with open arms.

He holds respect for Touka as a co-worker at Anteiku and is somewhat shy around her. Later on it is revealed that he has a crush on her. However, if the option to confess his feelings is chosen she politely turns Rio down, which leaves him heartbroken.

The mysterious ghoul whose actions caused Rio to be falsely accused of his crimes and arrested. Rio searches the wards for information on Jail. It was eventually revealed, however, that Rio and Jail are the same person, a result of madness of seeing his elder brother dying in front of him.

Rio suspects that he also might have been incarcerated in Cochlea, and deeply wishes to save him. As the story progresses, it is revealed that the two were very close, as his brother protected him, taking on the role of a guardian, as they were orphaned at a very young age. Unfortunately, however, he was killed by Shiki Kijima, and later made into the quinque, Rotten Follow. The incident led to Rio falling into a temporary state of madness and rage, killing several investigators, and as a result, earning the moniker, "Jail."

Rou was one of the suspects to be Jail, but it was revealed that she was not Jail. After meeting Rio, who tagged along with Kaneki group, in the Ghoul Restaurant that Kaneki targeted, Rou found Rio to be extremely attractive, leading her to attempt to cannibalize him.

In the course of the game, Ayato and Rio encounter each other and fight. However, Ayato befriends Rio and invites him to join Aogiri Tree so they can change the world together.

Naki and Rio meet while Rio is searching for Yamori's pliers as requested by Nico. The player has the option of befriending him.

When Rio meets Tatara during a sub-scenario and tries to talk to him the latter would dismiss the young ghoul as annoying and tell him to leave. Rio thinks Tatara is a scary person.

Rio meets Nico at Itori's bar, Helter Skelter. In the game, Rio would have almost sacrificed his first kiss to Nico in exchange for information about Jail if it was not for Itori.

A unique mechanism of the game allows Rio's Rc type to be determined by the player. As such, he has four potential kagune, each with a V2 and V3 version as the player upgrades it during game play.

Rio as a koukaku.

Retrieved from "https://tokyoghoul.fandom.com/wiki/Rio_(game)?oldid=480245"
Community content is available under CC-BY-SA unless otherwise noted.