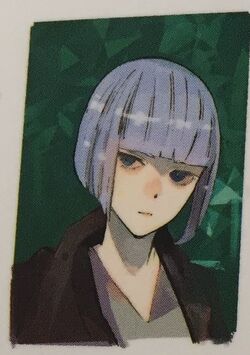 :re Episode 17
Rikai Souzu (僧頭 理界, Sōzu Rikai) was a former ghoul investigator and alumni of the Sunlit Garden. They served as a member of Kishou Arima's personal squad until their defection and later as one of Ken Kaneki's bodyguards.

Rikai was a serious-looking youth frequently dressed in the white coat worn by all members of their squad. They had pale lavender hair, cut into a chin-length bob with straight bangs.

Rikai was a serious and withdrawn person, and rarely spoke to others. They preferred to stick close to people they knew, and let others do the talking.

Rikai was raised in the Sunlit Garden where they were trained to be an exceptional ghoul investigator.

Rikai and the rest of Squad 0 was tasked to protect Cochlea and later encountered Ken Kaneki beside Arima's corpse. After Take Hirako approached Kaneki, Rikai asked Hirako if they may say their goodbyes to their former squad leader. Hirako immediately approved and Squad 0 proceeded to gather around Arima to mourn his death.[2]

Rikai and the rest of Squad 0 followed Kaneki deeper into Cochlea and encountered Eto Yoshimura who was critically injured on the floor. After their encounter with Eto, Squad 0 interfered the fight between Kiyoko Aura and Mougan Tanakamaru against Touka Kirishima, Ayato Kirishima, Renji Yomo, Kazuichi Banjou, and the members of Banjou's group.[3]

Rikai accompanied Shio in waking up Kaneki and then went out for breakfast with their squad. Later in the day, they participated in a meeting leading to the formation of Goat.[4]

Rikai and the rest of their squad respected and looked up to Kaneki as Arima's successor. They called him by his name as an investigator. Kaneki acted very kind and fatherly towards Rikai and their squad, even cooking food for them like he once did for his former "kids" in the Quinx Squad.

Hirako said that Arima was hope itself to the children of the garden. Rikai had profound respect and admiration for Arima, as the idol of all young half-breed illegitimate children of the Washuu raised in the Sunlit Garden.

Half-Human Physiology: A half-human hybrid, Rikai possessed enhanced physical abilities that allowed them to be a highly-efficient fighter.

Swordsmanship: Rikai was a skilled quinque-user, with a specialty in heavy weapons such as clubs or lances.