:re was a coffee shop run by Renji Yomo and Touka Kirishima. It was first introduced in :re Chapter 9, when Ginshi Shirazu, Tooru Mutsuki, and Haise Sasaki stopped by for a coffee. The cafe was later used as one of the places of shelter for members of the Goat organization.

Later, it was destroyed during an ambush of Tooru Mutsuki and Shinsanpei Aura.

At the end of Tokyo Ghoul √A, Touka puts a :re sign up as she opens for the day.

The upper dot of the colon is dark and the bottom one is white, similar to the eyes of a one-eyed ghoul. The colon is followed by "re". 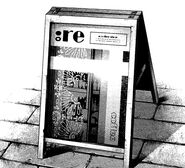 :re's logo on a board outside the cafe
Add a photo to this gallery

Inside of the cafe.

:re is burning.
Add a photo to this gallery

Retrieved from "https://tokyoghoul.fandom.com/wiki/Re?oldid=466651"
Community content is available under CC-BY-SA unless otherwise noted.