The Quinx Squad (クインクス班, Kuinkusu-han) or Qs Squad is a squad affiliated to Mado Squad that consists entirely of Quinx. The Quinx members are referred to as humans with built-in quinque in their bodies, drawing a distinction between them and normal one-eyed ghouls. The members are regarded as human research subjects who have undergone the surgical procedure developed by Dr. Kouitsu Chigyou. The tasks assigned to the Quinx were often monitored and overseen by Haise Sasaki until he resigned as their mentor.[1] They all currently reside in a house called The Chateau, located in the 1st ward.

Though the squad has proficiently skilled ghoul investigators, the Quinx members often face prejudice and discrimination from higher-class investigators, such as the Hirako Squad, who accuse them of being incompetent and sloppy at doing their work, rendering Haise Sasaki as the primary cause. However, after the Auction Mopping-up Operation their reputation greatly improved, leading to discussion of expanding their ranks.[2] After the Tsukiyama Family Extermination Operation their reputation further increased and the squad welcomed new members.[3]

The Quinx squad's first ghoul investigation was about an A-rated ghoul called Torso, who committed notorious murders of women, where their bodies were dismembered, beheaded and with only their torso taken away. His victims had only one thing in common, which was that they all had scars of some sort; this detail was found out by rank one Haise Sasaki, and rank three Tooru Mutsuki. Later on, rank two Kuki Urie and rank three Ginshi Shirazu engaged in battle with Akashi Kobayashi, a ghoul who's occupation was a taxi driver, thinking he was Torso. Kobayashi is proven not to be Torso, and after being defeated, was sent to Cochlea, ultimately given a B+ rating. After the ordeal, the Quinx squad was ordered by their higher ups to catch Torso in a month. Urie and Shirazu got more intel on Torso thanks to Chie Hori, meanwhile Haise and Mutsuki head down to Cochlea, a prison meant for ghouls. They conversed with the SS rated Russian ghoul, Donato Porpora, to gain more information on Torso.

Upon being told that Torso would possibly try to blend in to human society by being a taxi driver, Sasaki and Mutsuki analyzed an overlain map of hospital locations of all the previous victims and the murders in the proximity. Mutsuki was stationed by Sasaki outside of a nearby hospital, and when he saw a woman exiting the hospital to get into the taxi, he burst through and told the driver he needed a ride. The driver turned out to be Torso, confirming Mutsuki's hunch, and Mutsuki called for the others to come and assist him.

In the following battle between Torso and the Quinx squad, a second ghoul appeared, going by the name of Serpent. When he realized that the Quinx squad wouldn't be able to handle these ghouls, he went berserk and allowed a small piece of his former self to surface. Sasaki attacked Serpent, impaling him multiple times with his kagune, but when Serpent pulled back his hood and revealed himself to be Nishiki Nishio, it was a trigger to Sasaki's inner confusion with his past self and he began to howl. Soon being sedated and brought back to the CCG to recover, Sasaki recalled the one thing that Serpent said to him - "You still haven't found salvation, have you?"

The Quinx's squad second ghoul investigation. All of them excluding Urie, dressed up as women and went to a club to find the ghoul, Nutcracker. They soon noticed her, and waited for the right time to act. As they were waiting, Sasaki and Shirazu heard the loud laughing from a drunk Tooru, and saw him talking with Nutcracker. Saiko Yonebayashi approached Haise, informing him that Mutsuki had a drink. Right after, Mutuski ran over to them and reported to Haise that he got Nutcracker's contact info. In response, he praised him for doing so. Mutuski, Saiko, and Shirazu then shared a victory dance while Haise watches them with a smile.

The next day, Haise and Juuzou Suzuya met with Matsuri Washuu for a meeting. Tooru was eventually assigned a special mission alongside Suzuya.

After investigating Nutcracker, they were led to the Auction, where people got sold away to rich ghouls. Within them were Tooru and Juuzou, both of which were disguised as females. When Tooru was put up for sale, Uta told him that his reinforcements aren't coming, discouraging him. When it was Juuzou's turn to be sold, he went all out and instantly began slaughtering ghouls left and right, who were spectators of the auction. All of the ghouls fled away while Juuzou started to fight against Ayato Kirishima. Mutsuki was escorted by Nutcracker, until he kicked her to the ground, ran away, and later was founded by Kanae von Rosewald. While Kanae begun to beat him, Torso appeared and attacked Kanae, trying to save Tooru. Moments after, the Quinx squad all reunited. Urie was asked to escort Tooru outside, due to his exhaustion. While Tooru was with Urie, they found that were the spectators were in hiding. Along with Juuzou, they went to their hideout and started killing them. Soon, they came to face with Big Madam. Big Madam attempted to swallow Urie, but he broke through her, got mad, and started going out of control by eliminating more ghouls surrounding them. Urie ripped off Big Madam's kagune tail, in response he was punched savagely in the stomach, knocking him unconscious. He became infuriated for his weaknesses, and went on a rant on how he hated all his teammates. When Tooru tried to approach Urie, he stabbed Tooru with his hand out of rage. When Urie realized he had pierced Tooru, Tooru embraced him with his kagune, calming Urie.

Elsewhere, Ginshi and Saiko were going up against Nutcracker. It wasn't long before Ginshi realized the way Nutcracker's kagune worked, and decided to use it against her. Ginshi outsmarted her by causing her to move nearby one of her own traps, and when she fell for it, Saiko awakened her kagune, taking Nutcracker down. As she laid dying, Ginshi impaled her in the stomach, and during her last breath, she mourned over how she wanted to be beautiful. This moment haunted Ginshi, reminding him of his younger sister, Haru Shirazu, who herself also wished to be beautiful. Meanwhile, Sasaki was fighting with Seidou Takizawa, a former human and ghoul investigator who became an artificial one-eyed ghoul. Haise was relentlessly being beaten up by Takizawa, until he spoke with the child Kaneki in his mind, which ultimately gave him more power to fight against Takizawa, eventually ending with the two opponents impaling each other. 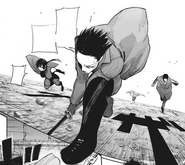