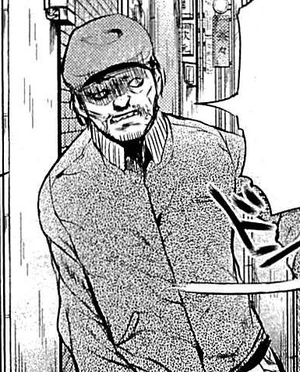 Episode 8
Oumi (近江, Ōmi) is a minor character in Tokyo Ghoul. He was a guest of Anteiku.

Rize Kamishiro's actions forced Oumi to stop hunting for weeks. Starving, he spotted Hide Nagachika in Anteiku after Rize's death and decided to go after him. During his hunt, he lost sight of Hide, so he attacked the next human that walked past him. To Oumi's misfortune, this human turned out to be ghoul investigator Kureo Mado, who killed him.[2]