They are stated to be made differently from the Quinx Squad in a new and innovative process. They were created under the authority of newly-appointed bureau director Kichimura Washuu using Akihiro Kanou's perfected kakuhou transplant surgery.[1][2] They were deployed against Ken Kaneki and all inhabitants of the 24th Ward to exterminate the organization known as Goat during the Goat Wipeout Operation. Despite killing many, including Arima Squad members Shio Ihei and Rikai Souzu, most of them were devoured by the crippled Kaneki after his regenerative powers kicked in. The RC cell overload from the Oggais' bodies caused Kaneki to mutate into his dragon form.

As a new race of one-eyed ghouls they have the previously unheard of ability to choose either to activate one or two kakugan at once.[3] It is estimated nearly a hundred individuals were produced, each enhanced to be superior trackers and adept ghoul exterminators. Kichimura compares them to Ken Kaneki, the original prototype on which they are all based. In battle, their rinkaku kagune were shown to be much longer, thicker, and capable of generating stronger and heavier blows than that of most ghouls.

Oggai members in their capsules.

Members killing ghouls with their kagune. 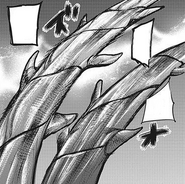 Oggai members.
Add a photo to this gallery

Retrieved from "https://tokyoghoul.fandom.com/wiki/Oggai?oldid=485847"
Community content is available under CC-BY-SA unless otherwise noted.