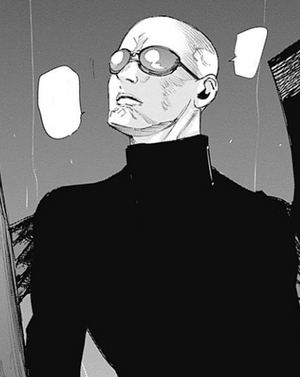 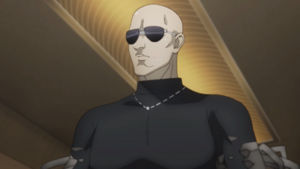 Re: Episode 4
Nutcracker's partner is a Ghoul seen working alongside Nutcracker. He took part in the battle at the Auction House, engaging the Quinx Squad and Daisuke Atou's squad in battle.

He is a tall, bald man dressed in all black with sunglasses.

Nothing was known about his personality, due to his small role.

He was first seen during the Quinx Squad's investigation, talking with Nutcracker at a cafe.

At the Auction, he ambushed the Quinx and Atou squads, killing one of its members. He fought briefly with Haise Sasaki, who noted him to be a tough opponent. On the orders of Matsuri Washuu, the Atou squad engaged him alone while the Quinx headed further into the building. He was eventually brought down after a fierce battle, after having killed two more members of the squad.

He is noted to be a strong and dangerous Ghoul, putting up a fierce battle against experienced Investigators, even killing three members of the Atou squad before being defeated. 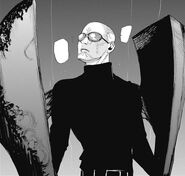