For the quinque, see Nutcracker (Quinque).

Mayu (痲ユ, Mayu), known under the alias Nutcracker (ナッツクラッカー, Nattsukurakkā), was a ghoul who preyed on men by crushing their testicles before drinking the fluids. She was tasked with capturing humans for an underground "Gourmet" society.

Suzuya Squad was in charge of the Nutcracker case, with the Quinx Squad supporting the investigation. She was killed during the Auction Mopping-up Operation by Ginshi Shirazu, and her kagune was turned into a quinque of the same name.

Nutcracker was an attractive young woman, with long black hair, light colored eyes, and vertical pupils. She seemed to prefer clothing with lingerie elements, and had teeth that had been dyed black.

Nutcracker, in her Auction costume.

Nutcracker during the Auction. 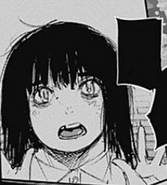 Nutcracker as a child.
Add a photo to this gallery

Nutcracker as a child.
Add a photo to this gallery

Nutcracker was a sadistic ghoul, and took pleasure in torturing her male victims, crushing and eating their genitals. She also had an obsession with money and beauty, stemming from her upbringing in extreme poverty.

With the Torso investigation put on hold, the Quinx Squad was reassigned to assist the Suzuya Squad with her case. Haise Sasaki described her unusual feeding habits to Ginshi Shirazu and Tooru Mutsuki, who were both deeply unnerved at the thought. Elsewhere, Nutcracker was wearing lingerie and spoke to a prone man wearing nothing but his boxers. She smiled and crushed his testicles underneath her boot while he screamed.[4]

During the meeting between the Suzuya and Quinx Squad, her identity had been uncovered. However, because of her involvement in a human trafficking ring and links to a Gourmet society, they decided to simply observe her. The Quinx were assigned to spy on her while she met with an unknown man, but the mission went south when Shirazu accidentally broke a glass. Nutcracker noticed him, but walked past him to get something to drink. As she filled her glass, she watched him closely with an interested look.[5]

The Quinx learned Nutcracker was seeking targets in the 13th ward, for an upcoming auction. Based on the requested items, she was looking for young women at local nightclubs and the Quinx go undercover in order to bait her. They observed her speaking to young women at the club, offering them a part-time job. An intoxicated Mutsuki approached her brazenly, and managed to secure the information about the "job," providing information on the date of the Auction. A plan was put into motion to use Nutcracker to infiltrate the event, tricking her into bringing an undercover ghoul investigator to the location.

On the day of the Auction, Nutcracker met with Mutsuki and Juuzou Suzuya and drove them to the location in a luxury car. However, the vehicle was filled with gas and both were knocked unconscious. Some time later, Nutcracker fetched Mutsuki and dragged him onto stage to be sold. The revelation that the "surprise item" was a one-eyed ghoul caused a frenzy and the resulting bidding war fetched a record 200 million Yen. After the sale, Nutcracker took Mutsuki back to the holding area and was so excited that she kissed him on the cheek in celebration.

When the CCG began the raid on the Auction, she attempted to escape with Mutsuki but was knocked down. She screamed in dismay at her "200 million" escaping.

Some time later, she ambushed several investigators as they entered the building's control room. The team had the upper hand against her and managed to wound her. However, before they could land another blow, she impaled Ryouta Ooshiba through the thigh. Mayu unveiled her dual-kagune type and killed several investigators with her koukaku. She turned on Ooshiba, crushed his genitals and consumed them before she cornered the last survivor — complimented the woman on her beautiful looks and devoured her face.

Ooshiba's last desperate call reached Matsuri Washuu to inform him about her dual-kagune, Washuu upgraded her rating from an A to an S-rated threat and ordered the Quinx Squad to exterminate her.

She attempted to find Mutsuki using the CCTV screens in the administrative tower while crying for her "200 million." Nutcracker noticed the Quinxes' attack and avoided it. As Shirazu prepared to attack her, he triggered one of her detached kagune traps and was impaled. She pressed the attack against Shirazu and Naoto Hayashimura, shrugged off their blows and left them struggling to fend her off. Shirazu barely avoided her attempt to stomp on his groin and was able to figure out the trick to her kagune traps.

Unaware of the trap being set, Nutcracker continued to fight with Hayashimura and wounded him. She dodged another attack by Shirazu and caused her to end up in the path of her own trap — which reacted to nearby objects and impaled her from behind. Unable to escape, she was attacked and rendered motionless by Saiko's kagune attack. She was finished off by Shirazu and in her final moments recalled her childhood of living in extreme poverty. She stated she wanted to be beautiful and died as Shirazu was shaken by her final words.

In the months following the Auction, her kakuhou was used to create a new quinque for Shirazu. However, he remained haunted by her death and had nightmares about her. When he picked up his new quinque from the labs, the memory of her final words caused him to vomit from the stress.

Even after he received the quinque, Shirazu was initially unable to use it. When he attempted to use it while fighting Kanae von Rosewald, he had a vision of Nutcracker strangling him from behind and collapsed in horror. He finally gained the resolve to use the quinque during his fight with Noro and tore him apart to pieces, although the damage done proved to be insignificant due to Noro's unique regenerative abilities.

The incident with Nutcracker haunted Shirazu, as he realized he was essentially given a weapon made from someone human-like that he had killed. This relationship resembled the opposite of Kaneki and Rize, where instead of becoming a coping mechanism, Nutcracker served as a trauma which reminded Shirazu of his feelings of guilt and doubts regarding the nature of ghouls.

Little is known, however they are seen together talking in a cafe during the time the Quinx investigated her. He also had a brief battle with Haise and noted him as a hard opponent.

Ghoul Physiology: Nutcracker possessed both bikaku and koukaku kagune with the ability to detach. 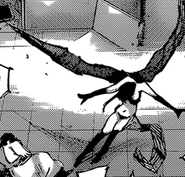 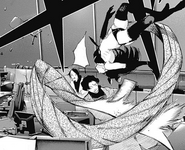 Nutcracker's traps, hidden inside a wall.
Add a photo to this gallery

Nutcracker's traps, hidden inside a wall.
Add a photo to this gallery

Retrieved from "https://tokyoghoul.fandom.com/wiki/Nutcracker?oldid=480003"
Community content is available under CC-BY-SA unless otherwise noted.