For the quinque, see Noyama (Quinque). 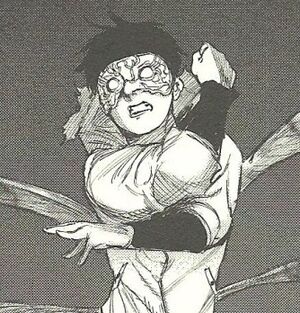 Void: Chapter 1
Noyama (野山, Noyama) was a ghoul adopted and raised by Yuujirou Utsumi, a wealthy human. Along with his sister, he was responsible for providing the family with young girls to eat. After his family's crimes were exposed, he murdered Tsumugi Yamagata and took off on his own. He was later targeted and killed by Ken Kaneki for his crimes.

He appears to have been an average young man, with short dark hair. His mask was noted to be decorated with beautiful, elaborate embroidery.

He was described as a rebellious and troublesome young man, always just barely controlled by his adoptive father. While Koharu felt remorse for her part in her family's crimes, he readily took part in them and even takes steps to cover his tracks afterwards. He was a cruel and selfish person, using his sister with the intention of gaining access to Utsumi's wealth.

At some point in his childhood, investigators killed his parents and left him orphaned. Along with Koharu, he was adopted by the human serial killer, Yuujirou Utsumi, and raised as his own son. While Koharu was responsible for capturing the girls, he was responsible for the "dismantling" of their victims — suggesting he was the one to actually kill and prepare them for food. In secret, he intended to use Koharu as a means to gain access his their father's wealth.

Koutarou Amon comes across him arguing with Koharu, who gives him an envelope filled with money. When the investigator tries to intervene, he quickly leaves the scene. Koharu defends him from Amon's suspicions, refusing to explain but promising nothing criminal was going on.[1]

He spends some time stalking Tsumugi Yamagata, an old friend of his father that provided him with his mask. After the old woman visited his father in the hospital, the young man ambushed Tsumugi and Asa. He seriously wounded them both, but fled when confronted by Uta. Tsumugi died of her injuries soon after, explaining that she knew he was intending to kill her out of fear that she would reveal what she knew. After killing Tsumugi, his whereabouts were unknown.[2]

After taking off on his own, Noyama's brutal crimes brought him to the attention of Ken Kaneki. He was tracked down by Kaneki's group, and cornered in a vacant building where he had been hiding out. After a fierce battle, he was defeated and eaten by Kaneki.[3]

Unlike his sister, he was noted to be a ghoul of moderate strength and an extremely aggressive one as well. He is strong enough to seriously injure Asa, but fled when confronted by a ghoul as powerful as Uta.

He was described as having been extremely rebellious and barely controlled, suggesting a poor relationship between them. Once free of his family, he took off on his own with little care for what happened to his father.

He had little concern for his young sister, using her to gain access to Utsumi's wealth and protection. Their relationship was very strained, with him showing open disdain for her and pushing her around to get his way. Other ghouls seem to have been aware that he was using his sister for financial gain.

Though she had been a friend of the family for many decades, and provided him with his mask, he considered her a danger. As such, once free from his family, he set out to eliminate her so that no one alive would know about him.