View source
watch 01:49
Who is Noro?
Do you like this video?
Play Sound 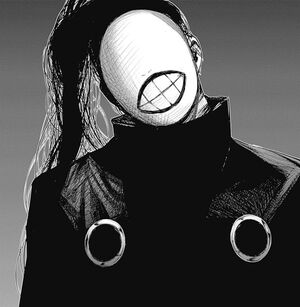 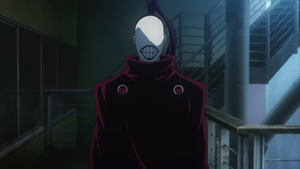 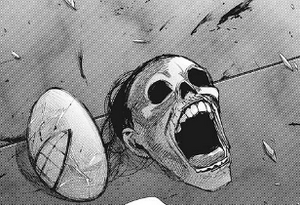 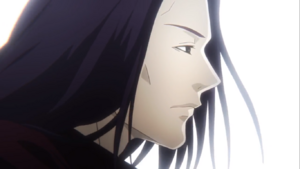 Christopher Smith
Noro (ノロ, Noro) was a direct subordinate of the One-Eyed King and one of Aogiri Tree's leaders.

In the past, he was a ghoul known as Noroi (ノロイ, Noroi) and was entrusted with raising Eto by Yoshimura.[5]

Noro was an eerie giant of a ghoul with long black hair tied up in a ponytail. Noro wore a white mask featuring huge black lips, a huge mouth with equally massive teeth and tiny slits for nostrils. His fingernails were black, much like those of a pre-timeskip Kaneki. After the time skip, Noro's hair had grown as they were seen with a much thicker ponytail. Under his mask, Noro's decapitated head had no eyes or a nose and seemed to have been mummified. The reason for this has yet to be known.

As Noroi, he was a powerfully built man with a serene expression. He wore a hooded robe similar to what he later wore as a member of Aogiri. 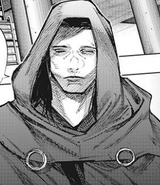 Young Noroi before he became Noro.

An intimidating giant in eerie silence, Noro seemed to communicate only through actions, not words. He carried around a clock when being fought by Tsukiyama, Yomo, and Uta. Tsukiyama speculated that he was under a curfew, much like a child. Noro never displayed any signs of pain or resistance when attacked and seriously injured and merely healed his wounds without problems. Despite that, Noro showed the ability to speak in his last moments, and displayed a level of intelligence.

The CCG had noted Noro's actions as unpredictable, he either ignored them or was ferociously aggressive.[7] Such behavior was demonstrated in the 11th Ward Battle where he decimated the squad that discovered the wounded Ayato Kirishima but ignored Juuzou Suzuya when he found Yamori's body and later assaulted the Itou and Quinx Squads during the Rosewald Investigation.

Many years before the series, Noroi was a ghoul living in the 24th ward. He was contacted by Kuzen, who was fleeing from the organization V, and entrusted with raising the infant one-eyed ghoul Eto.[5]

The exact circumstances and method that led to his transformation into Noro are unclear. However, Eto placed the blame for his fate on V, claiming they "took" him from her.[8]

Noro attended the meeting where Kaneki was brought before Tatara. At the end of the meeting, Tatara left the 11th Ward Base's affairs to Noro. Tatara predicted the Doves would come soon and ordered Noro to follow their plan. Afterward, Tatara left with Eto to meet comrades who were waiting for them.[9]

At the beginning of the CCG's attack on the Aogiri hideout, Noro waited until his clock showed midnight before he started to act.[10]

After the fight between Ayato Kirishima and Kaneki, Noro picked up the "half-killed" Ayato, and killed the CCG squad who discovered the pair in the process. He clashed with Renji Yomo, Shuu Tsukiyama, and Uta, displaying his absurd regeneration ability. When the alarm of his clock rang at two o'clock am, he casually picked up Ayato and left.[11] Afterwards, they went to the roof to retrieve Yamori as well. They left without fighting Juuzou Suzuya after realizing Yamori was dead.[12]

Noro appeared alongside Tatara on the streets when they confronted Amon, Takizawa, and other CCG investigators. Using his ghoul abilities, one of Noro's kagune bit off Takizawa's arm.[13]

In the √A anime, Noro also encountered Hideyoshi Nagachika and was later shown to have inflicted a lethal injury to him.[14]

Overlooking the scene, Eto gave Noro orders after the first fight began during the operation. In the Luna Eclipse, he barred the way of the Itou Squad and Quinx Squad, minus Haise Sasaki. He immediately attacked after the investigators organized their formation, he cut Yasuhito Nezu in half and devoured Masami Umeno who was on back support. His next attacked on Saiko Yonebayashi and Kuki Urie were repelled, and was pinned down by Tooru Mutsuki and Ginshi Shirazu's kagune before being cut in half by Saiko's. Noro, however, regenerated, stood back up and broke Kuramoto Itou's rib cage with one strike from his kagune.

After being struck by the explosive power of the Nutcracker quinque, Noro was blown into four separate pieces and had his head stabbed through by Shinji Michibata. However, the ghoul's lower half came back to life, activating his kakuja and piercing through every remaining able investigators' bodies on scene aside from Shirazu and Saiko, who was still recovering from the use of her kagune.

Noro continued fighting with Shirazu who repeatedly strained himself and bombarded the ghoul with continuous projectiles from his own kagune in order to defeat Noro. Despite Shirazu's best efforts, Noro regenerated from the damage once more and impaled him in midair. However, Shirazu used his remaining strength to shout out at Urie to deliver the final blow using the distraction he provided. As Urie was about to strike him with his kagune, Noro called out to Eto that he would "go ahead," before Urie delivered the finishing blow to him.[3] After the fighting had ended, Takeomi Kuroiwa gazed at Noro's mummified head lying on the floor next to his mask.[5]

After his death, his kakuhou was used to create the quinque Ginkui.[4]

As a subordinate of the One-Eyed Owl, he follows Tatara's commands. An omake suggested the two are actually close, as Eto noted that Noro would be sad if something were to happen to Tatara.[15]

As Noroi, he was entrusted with raising her and seemed to have been a loving caretaker. At some point during their life together, something happened that resulted in his transformation into Noro. He remained at her side, as a loyal subordinate.

In the past, the two seem to have known and trusted each other. Kuzen trusted him enough to leave his infant daughter in Noroi's care.

Ghoul Physiology: Being a ghoul, Noro possessed a bikaku kagune, kakuja, and very high levels of regeneration that were unique to him. However, Noro possessed a physiology unlike any other ghoul. He was able to form kagune-like structures from his body even after being severed in half, and from the perspective of an average ghoul, he ate an absurd amount of meat. Out of all ghouls acknowledged by the CCG, Noro was considered to be one of the strongest ghouls, excluding the One-Eyed Owl and Shachi.[16]