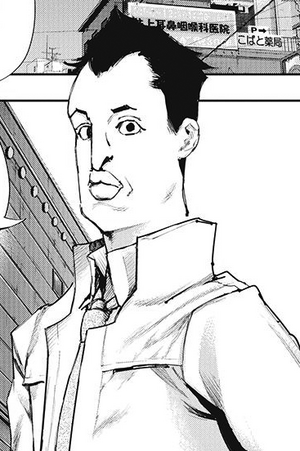 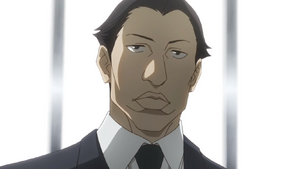 Marcus D. Stimac
Nobu Shimoguchi (下口 房, Shimoguchi Nobu) was a First Class Ghoul Investigator and led his own squad until his death. Until recently, he worked on the Torso case, along with the Quinx Squad.

Shimoguchi was shown to have a tall, lean build with very little excessive body fat. He had short dark hair which was slightly quiffed upwards with a receding hairline. His face was long with a wide jaw and flat facial features. His most recognizable feature were his very large, full lips. In one instance, Haise Sasaki thought of Shimoguchi in that his lips were depicted as being much larger than they were in actuality, they were most likely drawn this way for comedic effect or to emphasize Sasaki's spite for him.

As a ghoul investigator, he came off as quite dedicated to his work, but seemed to be somewhat of a bigot; as seen when he ridiculed and embarrassed Sasaki for being unable to control his squad members independently. Shimoguchi was also prejudiced against the Quinx Squad as a whole. However, he was gloomy and expressed grief when his subordinates were slaughtered by Black Rabbit.

Shimoguchi was first seen when Sasaki and Tooru Mutsuki decided to consult him about the whereabouts of Ginshi Shirazu and Kuki Urie. Instead of giving them any information on the Torso investigation, Shimoguchi embarrassed Sasaki for not being able to control his squad members independently, telling him that he was not fit to be an investigator in the first place.

Later on during a meeting held among the Mado, Hirako, and Shimoguchi squads, Shimoguchi ignited a quarrel with Sasaki, and much to his dismay, he was forced to work in collaboration with the Quinx Squad on the Torso investigation instead.

After Torso's true identity had been exposed, the Shimoguchi Squad visited Torso's home to scrutinize his victims and acquire some secret information of taxi recordings. Moments later, it was reported that the SS-rated Rabbit of Aogiri Tree attacked and killed all the squad members, leaving Shimoguchi as the only survivor, though critically injured.

Shimoguchi was later seen in the hospital, sulking over the loss of his underlings. He told Akira to leave his get-well gifts, but later agreed to tell her everything that happened while at Torso's home.

Stumbling across Roma Hoito and recognizing her as a remnant of the Clowns, he warns Rank 1 Shunichi Shibashi to keep his distance. He was, however, disregarded by the young investigator, who believed that "subordinate killer" Shimoguchi's time was over and that it was the new generation's turn to shine, only to get killed by Roma instantaneously. Along with Hirako, Shibashi, and his own squad, they engaged in combat with the Clown before Uta arrived.

Shimoguchi entered the Luna Eclipse building after the vanguard, but ten minutes before the Quinx Squad arrived. His squad stumbled upon a ghoul who resembled Noro and decided to exterminate it as a team, proceeding cautiously. Before being able to finish announcing his statement to exterminate the ghoul completely, the masked individual swiftly cut off his left arm and four of his right hand's fingers. Coming to terms to his inevitable death, Shimoguchi told his new subordinates that he hated them so they would leave him behind to escape, but was instead told that he was liked by them before being killed all together.

At his dying breath, Shimoguchi thought back of his past on how he used to play with a certain boy named Yamagawa, but could not remember why they stopped interacting. He believes that it was because of his unattractive face and introverted nature that caused his mother pain; he wondered what she would do if he died. He was then decapitated by a crazed Kanae in the aftermath and described as a beautiful rose.[3]