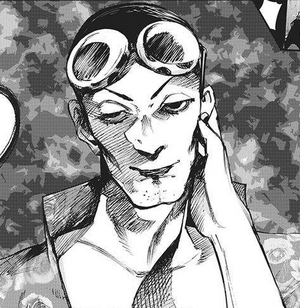 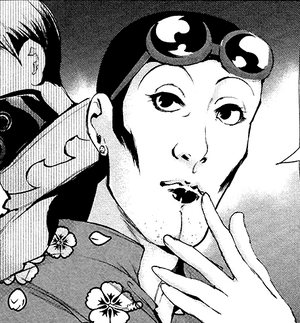 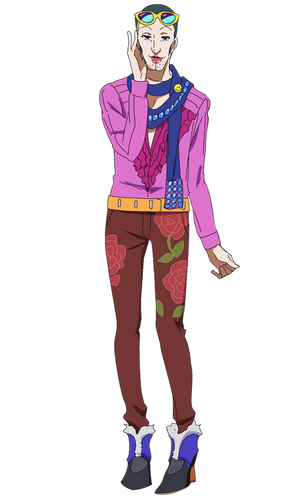 "There are only two ways that a person can live. Live beautifully or live for the sake of someone beautiful."— Nico, Tokyo Ghoul Chapter 78

Nico (ニコ, Niko) is a member of the Clowns and a close friend of Itori. He used to act with Yamori and participated in Aogiri Tree. As of now, he has grown to become more involved with the other Clowns.

Nico has a very feminine, colorful taste for fashion and dresses very elaborately. He is a man with low-cut brown hair, a stubble beard on his cleft chin, and violet eyes. He wears colorful sunglasses usually fastened on his forehead and pink lipstick. He also wears a long-sleeve, pink v-neck blouse decorated with frills, along with a blue scarf, orange belt, red pants embroidered with roses, and heeled boots.

He has a clown mask. 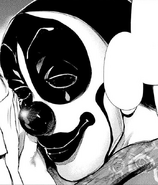 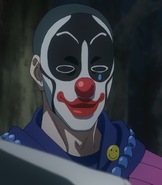 Nico is a very flamboyant and outgoing person, with a playful attitude that hides his rather twisted personality. He is fascinated with the extremes in life, both things of great beauty and horrifying violence. From his interactions with Yamori, he appears to be a sadomasochist who enjoys his own pain as much as witnessing the suffering of others.

However, he does have something of a conscience with lines even he will not cross. He expresses misgivings over cruelty towards children, as well as some of the antics of fellow Clown Roma Hoito.

He is also shown to be quite intelligent and cunning, gathering information on Aogiri while earning the trust of its leader with little effort. Though clever, he is also quite whimsical and prone to getting swept up in whatever current subject has his interest to the point of ignoring all other things.

Yamori and Nico were ordered by Aogiri Tree's leaders to capture "Rize herself" or "the person smelling like Rize."[3] Together with Ayato Kirishima, they raided Anteiku and captured Ken Kaneki. Yamori informed Tatara they captured the one who held "some of Rize" and would bring him to Noro's place.[4]

Later, when Yamori planned to kill a mother ghoul before her own child, Nico attempted to talk him out of it, seeing it was too cruel and perverse, even for a ghoul. In turn, Yamori became agitated, killed the child, Kouto, first and the mother, Kei, afterward. After Yamori had left, Nico placed Kouto and Kei side-by-side, saying he could at least give them a parting gift, even though he could not save them.[5]

After the invasion of the Aogiri's 11th Ward Base, Nico went along with Souta and sniffled back some tears over the hideout he considered his "love nest" and Yamori, who was unable to fill "the hole where his loneliness lied." Souta asked him if the One-Eyed King really existed and Nico answered that the King did not exist and then explained how so after he whispered to him. With that mention, they started talking about Kaneki and how much he had changed. In the end of their conversation, Nico wore his mask revealing both of them were members of the Clowns.[1]

He appeared in Itori's bar where he met Kaneki and clarified he was not a member of Aogiri Tree but was there for Yamori's sake. Kaneki did not believe his words, thus Nico told him more information of Aogiri's main goal and the identity of the "One-Eyed King." Nico informed Kaneki that the One-Eyed King was possibly the "little-bandaged girl," referring to Eto.[6]

Nico celebrated Kaneki's downfall along with the other Clown members.[7]

Nico was at a nightclub in the 13th ward, in the company of fellow Clown Roma Hoito. The pair noticed the Quinx Squad, recognizing a disguised Haise Sasaki and were immediately interested in his resemblance to Kaneki. He was put off by Roma's excitement at the idea of "killing" Haise but admitted things were going to be interesting at the upcoming Auction.

Nico arrived unannounced to the Goat's hideout - by direction of Roma's detached kagune. He told Roma she should decide on a more suitable time to escape her captivity. Kazuichi Banjou asked if he was there for Roma but he denied it, he said she was an "idiot" and added that whatever they did to her was of no concern to him. The purpose of his visit was to instead "curry favor with" Kaneki. He made a suggestive remark to Nishiki Nishio before saying Akira Mado was on the path to dying. Recognizing Banjou was inexperienced in healing humans since Nico knew a "few tricks," he shared that, while Akira was healing, the true issue was her recuperation. The amount of Rc cells in her system had spiked and needed to be removed. Giving them the ultimatum of seeing a doctor knowledgeable of ghouls, they were shocked when he presented the option of Akihiro Kanou. After they immediately deemed the choice impossible, Nico brought out a card bearing the name of Jirou Yamamoto and included the contact information of the Great Wheel Act.[8]

Nico stood next to Uta nearby the CCG's Main Office. Uta questioned Donato Porpora's whereabouts, and Nico responded that he was checking their "little prey." As the attacks continued, Uta and Nico enjoyed their little conversation. A little while later, Nico was seen engaging in combat with the S2 Squad, slithering his kagune tail across the ground and murdering the investigators playfully. Matsuri Washuu claimed that he felt familiar with him.[9]

His relationship with Itori and the others as drinking buddies stayed the same. Eventually, he traveled south to look for love.

Ghoul Physiology: Being a ghoul, Nico possesses enhanced regeneration and senses, as well as a kagune.