Edit
watch 01:53
Who is Nashiro Yasuhisa?
Do you like this video?
Play Sound

She was fatally wounded in battle, and abandoned to die by Akihiro Kanou. Her sister claimed that she survived on as a parasitic mass on her stomach, but Kanou claimed this to have been nothing but a delusion to cope with Nashiro's death.

Nashiro and Kurona are identical twins. When they were children they both had light colored hair and dark eyes. However, after being experimented on by Kanou and made into half-ghouls they both received a kakugan. Nashiro's kakugan was in her right eye with a small dark mark beneath it. Nashiro had white medium-length hair with bluntly chopped bangs (similar to what she wore whilst she was an Academy junior). Her predominant outfit was a long white cloak with one sleeve on the right arm with a symbol similar to an eye on the hood. Her ghoul mask was a simple black and white horizontal-striped mask with a hole in the right eye. 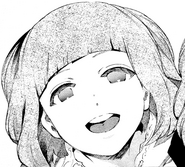 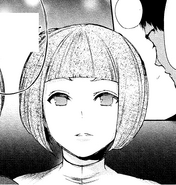 Nashiro's mask in the manga.

Nashiro's mask in the anime.

As a child, Nashiro was very cheerful and sanguine until she witnessed the brutal murder of her parents at the hands of a ghoul. The trauma caused by their deaths had caused Nashiro to become cold, distant, and relatively nihilistic. She decided to become a one-eyed ghoul because she considered being human and living in the current "twisted world" to be the cause for her misfortunes in life. Her misanthropy is the result of Akihiro Kanou's manipulations.

The one thing that Nashiro cherished more than anything was her sister Kurona, the feeling which strengthened since their parents' death. She was willing to put aside any kind of mission or objective if her sister was in danger and vice versa. This is shown through Kurona's immediate attack against Juuzou Suzuya after he severely injured Nashiro with his switchblades. Later on, she was carried by her sister, fleeing the battle.

Nashiro was born into a wealthy family and they lived happily together in a lavish mansion. As a child, her sister dreamed of becoming a chef and opening her own restaurant, and Nashiro wanted to be her customer. Her happiness was cut short however when a ghoul broke into her home and brutally murdered her parents in front of her and her twin sister. Following her parents' murder, she and her sister were immediately taken into the CCG's custody where they became wards attending their Academy Junior School.[7]

Like many children orphaned by ghouls, she wanted to become a ghoul investigator and did well in her courses. When Nashiro was fifteen, she began sharing classes with Juuzou Suzuya, who at the time still went by Rei. She and Kurona found him strange, but tried to get along with him regardless and disliked how others spread rumors about him and used them as an excuse to ostracize Juuzou. It was also during that time she met Koutarou Amon who visited as a guest lecturer. Nashiro and her sister quickly built an admiration for Amon and spoke to him after class. They asked if women could become ghoul investigators and Amon assured them that they could. He named off a few noteworthy female investigators, one of them being Kasuka Mado. They were curious about her, but Amon told them that she was killed in the line of duty and heard the term "one-eyed ghoul" for the first time. Shortly after Amon's lecture, one of Nashiro's friends, Shizuku Kawakami, died of illness. While mourning, she and her sister went for a walk in the woods where they found Juuzou. They wondered if he was sad about Shizuku and were disturbed over his weak grasp of life and death. Nashiro noticed that Juuzou was covered in blood and learned that he was the one responsible for the spree of animal killings.[8]

At some point afterwards, they disappeared. Unbeknownst to their peers, they were manipulated by Kanou and later became subjects of the kakuhou transplant surgery. After this point, the twins would refer to Kanou as their father.

Nashiro and her sister accompanied Madam A to the Ghoul Restaurant as her bodyguards since Kanou had predicted that Kaneki might target her. They fought Kaneki and when she and Kurona used their kagune together, they were able to block his attack and push him back. After she exposed her kagune, it was immediately recognized as the same as Kaneki's; a kagune derived from Rize Kamishiro. After Madam A escaped, she removed her mask showing her single kakugan, confirming that Kanou was still performing experiments.[9]

During Kaneki's investigation into Kanou, Nashiro stayed with Kanou in his lab to look after test subjects and Rize.[5]

After Kaneki and his gang apprehended Madam A, they located Kanou's hideout and infiltrated his secret laboratory. They encountered Nashiro and Kurona waiting for them, but Kaneki slipped past to let the others take care of them. They fought Shuu Tsukiyama, annoyed all the while as they found him pretentious, but strong. Just as they began to fight more seriously, Naki swooped in and accidentally saved Tsukiyama. Aogiri had arrived and between them and Kaneki's gang, they wondered what to do.[10]The fight came to a momentary standstill until Naki attacked Tsukiyama and the fight commenced between Aogiri and Kaneki's gang. However, Eto slipped by and the twins went after her.[11] They followed Eto to an isolated location where she taunted and spoke to them about their past. Nashiro and her sister repeatedly tried to attack Eto, but she dodged them so quickly that the twins could not see her. Eto dug at their painful past, what they had done to their bodies, and how they fell for Kanou's manipulation until they collapsed from mental and emotional anguish.[12] A little while after CCG's arrival at the lab, the twins ran into Juuzou Suzuya, a familiar face from their days in the academy. Following a brief exchange of words, the twins then engaged him in a skirmish.[13] Juuzou fought against them, reveling in how fun it was and wanting to see their guts. However, Juuzou became too laid back and the twins were able to slash his abdomen open. Juuzou was able to see his own guts instead.[14] He flailed around and appeared too injured to fight, so the twins attacked again, asking Juuzou not to think badly of them. It was an act however, and as they approached, Juuzou stuck a knife in Kurona's kakugan.[8] Juuzou was able to seriously wound Kurona with his stash of Scorpion 1/56 knives, leaving her almost helpless.

Nashiro came to her aid but Juuzou used his quinque to nearly kill her, with the intent of taking her away from her sister. Kurona rushed to her sister's rescue and just as she reached her sister, they clasped hands and Juuzou severed Nashiro's arm at the forearm. Nashiro collapsed onto her and Kurona debated with herself over what to do before deciding to flee with her sister to find Kanou.[15] Nashiro was carried to Kanou's hidden security room, Kurona hoping the doctor could save her. There he was found with Eto and Matasaka Kamishiro. Kanou stated that Nashiro's damage was beyond recovery and that they should leave her. Despite the terrible news, he smiled and said that Kurona would make many new friends. Kurona, shocked, fell to her knees still holding Nashiro. Kanou then left with Aogiri.[6]

Sometime later, a distraught Kurona decided to consume her fatally wounded sister through her kagune as a last resort to save her from dying, but unknowingly killed Nashiro.[2]

During the operation, Kurona wandered Rushima while apparently hallucinating conversations with her sister.[16] During a confrontation with the Suzuya Squad, she becomes angry when asked whether Nashiro was still alive. She opened her robe to reveal a deformed, humanoid face growing out of her abdomen, and claimed that it was Nashiro. It made nonsensical noises in response, though it was unknown whether it was truly Nashiro or not.[17] Kurona eventually found Kanou and tried to persuade him to save Nashiro. However, he claimed Nashiro was dead, and the sounds and movements she made was Kurona trying to make something out of nothing.[18]

Nashiro's twin sister. Ever since they were left as orphans as children, they formed a tight, inseparable bond.

The doctor who performed the kakuhou transplant surgery on her and her sister. He manipulated Nashiro into thinking that he cared about her and referred to him as "papa".

A former classmate from the academy, Nashiro found him very strange and disturbing. Sometime after the academy, she met Juuzou in Kanou's underground lab where she finds him as disturbing as ever and is shocked to learn that the CCG let him become a Ghoul Investigator.

Amon occasionally went to Nashiro's academy to give lectures. She respected him as a teacher and would approach him after class for advice. Amon saw her being carried by Kurona in Kanou's lab, who fled after noticing him.

The prototype who Kanou experimented on before performing the Kakuhou Transplant Surgery on Nashiro. They fought several times to prevent Kaneki from getting too close to the doctor. She referred to him as "big brother".

Nashiro used to work as her bodyguard to prevent her from being captured by Kaneki and his gang.

Even before becoming a ghoul, Nashiro was a promising candidate to become a CCG investigator, meaning she had considerable strength and intelligence from an early age. After becoming an artificial one-eyed ghoul, Nashiro had the heightened speed, strength, and regeneration capabilities of a ghoul.

Ghoul Physiology: After inheriting Rize Kamishiro's kakuhou, Nashiro displayed an unique healing factor, as well as a rinkaku kagune and increased physical power. Due to the hybrid vigor, Nashiro's abilities were said to be more potent than that of a natural-born ghoul. 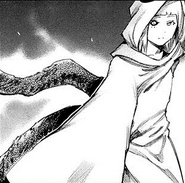 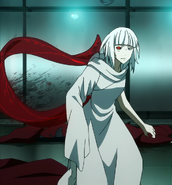