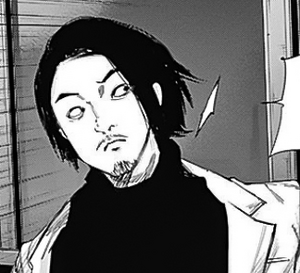 Hayashimura is an average man with long dark hair and sports a goatee and a thin mustache. His style of dress is typical of investigators.

Hayashimura participated in the Auction Mopping-up Operation as the deputy squad leader of the Ooshiba Squad.

When their squad encountered Nutcracker in the control room, they were caught by surprise of Nutcracker's chimera kagune and almost got completely wiped out. Luckily, he was thrown out of the window by Nutcracker earlier and managed to survive after falling in a bush.[2]

After joining the Quinx Squad who were heading to the control room, he joined Saiko Yonebayashi and Ginshi Shirazu in fighting Nutcracker once again. After a few brief clash, he acted as bait for Shirazu's plan to force Nutcracker onto one of her own traps. He was left shaken after seeing Saiko's kagune immobilizing Nutcracker and noted that he did not know who the real monster was anymore.[3]

For his actions during the Auction Operation, he was promoted from Rank 1 to First Class.[4]

After resolving to make up for his past mistakes, Shirazu approached him and requested a haircut. Saiko later explained to the other Quinx that before becoming an investigator, Hayashimura had intended to be a hair stylist.

Naoto appears to be an investigator of relatively substantial skill, being capable of putting on pressure against and briefly holding his own against an S-rated opponent, Nutcracker, a ghoul notable for wielding two different kagune types.

Thinning: A bikaku quinque resembling a straight sword featuring a serrated edge. The weapon displays sufficient sharpness to cut a rather deep gash into a pair of koukaku kagune.