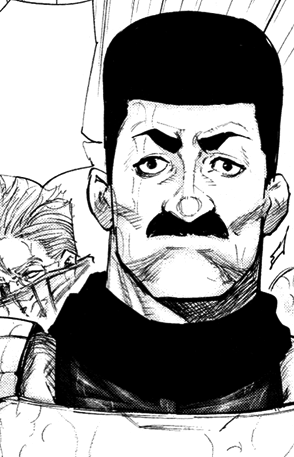 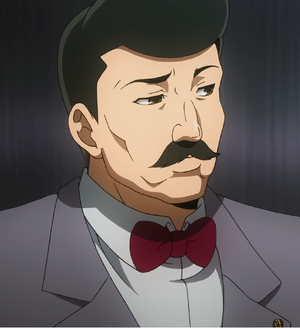 Barry Yandell
Mougan Tanakamaru (田中丸 望元, Tanakamaru Mōgan) is a former Special Class Ghoul Investigator and the Branch Director of the CCG's 2nd Ward Branch Office. He acted as the captain of Squad 2 in the Owl Suppression Operation.

He resigned from the CCG after the Dragon War and became a monk.

Mougan is a heavy-built man of middle age, with black hair and eyes. He wears his hair in a pompadour style, and has a neat mustache. 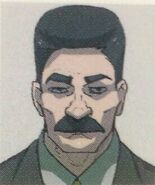 Mougan's profile in :re Volume 8.

Mougan is rather emotional and flamboyant, shedding tears of admiration while watching Arima battle the Owl and shouting during fights. He has a habit of saying "Mmmm boy," which annoys some people around him, however, he appears to be well-liked by those in the 2nd ward for his reliability.

Mougan led Squad 2 and later fought against the Devil Ape.[4][5] Eventually Mougan defeated him, but was interrupted by Ken Kaneki, who rescued Koma and damaged his quinque.[6]

After the appearance of the One-Eyed Owl Mougan made his way to the rooftop and engaged her in combat with a reserve quinque after complimenting Juuzou Suzuya on being a model investigator.

Mougan first appeared in a high-profile CCG meeting, concerning Aogiri.[7][8] And later, he fought Enji Koma before their fight was interrupted by Kaneki.[9]

Mougan attended another Special Class Investigator Meeting regarding Aogiri. Despite the heavy subject he remained lighthearted, teasing Koori Ui and recalling his childhood adventures on Rushima.[2]

During the Third Cochlea Raid, he was appointed the leader of Squad 5 to protect the CCG asset, Cochlea.[10] Mougan approached Kiyoko Aura while he was preparing the clash with the group of escapee ghouls. He mocked Ayato Kirishima while engaging him in combat. As Kiyoko quickly overpowered Ayato with her quinque, the two prepared to deal the finishing blow, while Touka Kirishima protected Ayato with the force of her kagune. Mougan told Kiyoko to continue attacking in order to tire the ghoul.[11] Their attacks were repelled by the kagune, as Renji Yomo immediately engaged Mougan in a fight. Using Yomo's moment of distraction to his advantage, Mougan quickly rammed his quinque into the ghoul's stomach and activated Higher Mind's close combat attack, blowing the ghoul away in the process. He was then shocked when Take Hirako suddenly appeared and presented his resignation while preparing to engage Mougan in combat. Just after this, Kaneki arrived, and Mougan watched —flabbergasted— as the ghoul claimed he was the One-Eyed King.[12]

A news broadcast stated he and Kiyoko Aura were seriously injured but survived.[13]

He became a monk after taking over his parent's temple. He also paid a visit to Ui.

A Special Class Investigator, he is an extremely powerful and experienced individual. This was made evident when he defeated the Devil Ape who was self-proclaimed to be stronger than Black Dog. 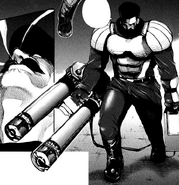 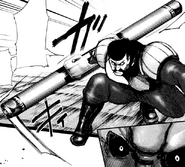