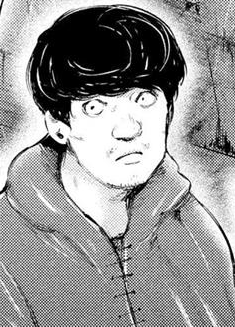 He wears the typical attire of Aogiri Tree's members.

Before he was forced to join Aogiri, he went by the name Yamamoto (山本, Yamamoto).[1]

Moku participated in the Anti-Aogiri meeting of ghouls associated with Banjou where they planned to escape from the 11th Ward Base.[3]

He was killed by Yamori during the groups escape attempt.[1]