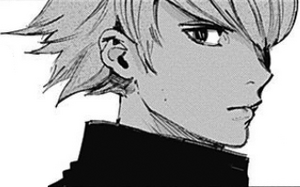 Brandon McInnis
Mizurou Tamaki (環 水郎, Tamaki Mizurō) is a Rank 1 Peacekeeper. He is a member of the TSC's Suzuya Squad and is assigned to the 13th ward.

Tamaki is a young man with an average height and build, and often wears the typical uniform for the Suzuya Squad. Tamaki has light brown hair that is combed to the right and his hair in the back is swooped outward.

Despite his serious looks, Tamaki is shown to be quite confident with his actions (as seen in the omake in volume 3) when being relied on. He is stated to love spending money on things like clothes, figures and games, which shows that he probably cares about his looks, and he likes gaming. He dislikes it when people lie to Juuzou, implying he is quite protective of his seniors and the other members in his squad. Tamaki had named his quinque "Beef," showing that he has quite a sense of humor as well.

He joined Suzuya and Hanbee Abara briefly in their investigation on the Skull Masks.

Tamaki and his fellow squad members dealt the final blow to Big Madam.

He landed alongside the other members of Suzuya Squad on Rushima.

During Juuzou's fight with Kurona, Tamaki with the rest of the squad, came up behind Kurona. However, their attacks were all parried. As Kurona celebrated over Juuzou's "death," the rest of the squad attacked her immediately. When she claimed that Juuzou was not important enough for them to mourn him, Mizurou along with others bursted into laughing, mocking her while Juuzou sneaked up to her and ambushed her.[2]

Tamaki is engaged in security duties with Abara. He married a lady who works as an office clerk at the TSC. With Abara's advice, he left the front lines and now acts as administraive support.

Juuzou seems to have good relationships with Tamaki, as seen in the omake in volume 3. Juuzou would ask Tamaki for help when Hanbee Abara is not around, like popping a purin out for him, which Tamaki would gladly help (only to make a mess). Tamaki also does not like people lying to Juuzou.

Swordsmanship: Mizurou displayed formidable combat and strategy skills, being able to fight on par and hold off, along with the rest of his squad, an SS-rated kakuja ghoul.[2]