"Until the instant I draw my last breath on this Earth, I, the leader of the Blades will fight with my head held high."— Miza Kusakari, Tokyo Ghoul:re Chapter 93

Miza Kusakari (草刈 ミザ, Kusakari Miza) is a ghoul and a former executive of Aogiri Tree. She is known by the alias Three Blades (三枚刃, Sanmaiba) in reference to the shape of her kagune. She was the leader of the 18th ward and the Blades gang.

Miza is a rather unusual-looking woman, with a very distinct hairstyle. She is of short stature and wears her salmon-colored hair with a large section tied into a high top-knot and pieces framing either side of her face. She wears the long robes typical of a member of Aogiri. In the anime, her hair is light purple. 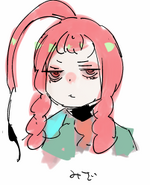 Illustration of Miza from Ishida's tumblr. 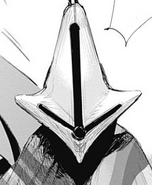 Miza comes across as very reasonable and serious, doing her best to temper more irrational members such as Naki.

Miza was briefly mentioned by Eto to be among those selected to be guards for Big Madam at the upcoming Auction. Miza made her first appearance on a rooftop, correcting Naki when he mispronounced "emotionally unstable." Miza called Naki an idiot when he rushed into battle recklessly. She then led her own group of similarly masked followers into the fray and supported Naki in the middle of battle by killing Jun Numa. Soon after, she was irritated by Naki's behavior when he shouted out her name.

When Naki was wounded by Akira Mado, Miza addressed Akira, stating that it would be a problem for her if Naki died, which Akira then replied that she would kill him right then. She engaged Akira in combat, during which Miza sustained a wound and was asked to retreat by Hinami Fueguchi.[3]

When Ayato appeared to push back CCG investigators to save Naki, she mentioned that it was his decision to ditch Big Madam for his teammates, not the Aogiri Tree's order, and that she did not hate that choice. When Hinami left to fight Takizawa, Miza took over some of the leadership responsibilities and ordered the retreat when the arrival of S3 Squad suggested the attack on the Quinque Steel Transport had failed.[4]

Miza was at the Aogiri hideout on Rushima where Ayato asked her if she had seen Torso. When she denied knowing his whereabouts, their discussion moved towards the upcoming assembly held by Eto. Neither of them knew what the assembly was about, just that Eto had something to say and everyone had been asked to gather. Miza then asked about Cochlea, however, the news was as bleak as ever. It was far too secure and even information about guard shifts was null. Their conversation ended with Ayato informing Miza that Naki was already at the meeting hall. Miza wondered why she would care to know so Ayato noted that it was odd for her to be on lookout duty, so he figured she was looking for him.[5]

Some time later, Miza was on Rushima when the ghoul investigators arrived. After being cornered by Suzuya Squad, Miza retreated to a building, commending Juuzou's strength and recalling her time with Aogiri members. She was soon interrupted by Hanbee Abara attacking one of the Blades' members, and they soon begun their fight. Seeing that Hanbee had the upper hand, Miza kicked Silver Skull, his quinque, into the wall, before assaulting him from the top. However, Hanbee countered the attack by activating a remote change on his quinque, releasing six tentacles, piercing her right afterwards. Miza fell to the ground, injured from the attack.[6]

Miza woke up and noticed Naki sitting against a wall with his arms crossed. When she called out to him, she noticed a myriad of CCG corpses and looked back at Naki again who slowly fell to the ground with his eyes closed and blood dripping from his mouth. With tears in her eyes, Miza fell over Naki and called his name.[7] She faced Koori Ui and his squad. However, Koori's attack was blocked by Naki's kagune, whom she believed was dead. She told him to fight with her against the investigators, he agreed before the arrival of Shuu Tsukiyama and two hooded figures. She accompanied Naki and the rest of the ghouls on their way to escape Rushima.[8]

Miza participated in Goat's assembly, and discussed Kaneki's intentions for the group.[9] During the Clowns' attack on Cochlea, Miza asked for Kaneki's orders to counter their plan to put to blame on the One-Eyed King, as Kaneki ordered for white suits.[10] Seeing that Naki disagreed with his plan, Kaneki asked whether Miza elaborated their actions, to which Miza replied that Naki escaped before she had the chance to finish. As an infuriated Naki assaulted Kaneki, Miza desperately attempted to stop him, as she acknowledged Kaneki's strength.[11]

Miza was not active during the clown siege.

Naki's questionable behavior tends to annoy Miza, who corrects him when he mishears words and berates him for acting foolishly. However, she has shown feelings towards him, e.g., she tried to give him frozen blood in the shape of a heart on Valentine's Day or even wrote their names beneath an umbrella.[12] After the events of the Dragon War, she and Naki got married and had 9 children (6 boys and 3 girls).

She weeps for him after he was badly injured protecting her from investigators while she was unconscious.[7]

Miza seems to respect Hinami, speaking politely to her and apologizing for things getting out of hand. After her capture, she tries to support Ayato in trying to retrieve her from the CCG.

Miza knows Ayato as a fellow Aogiri executive but have not been seen interacting together much. She is however, fond of Ayato's decisions such as when he disobeyed direct orders to put his fellow members' safety as first priority.

Miza does not seem to be hostile to Kaneki despite his previous enmity towards Aogiri Tree and his career as a ghoul investigator. She agrees to listen to his explanations before making her decision to become his subordinate.

Ghoul Physiology: Miza is an S-rated ghoul with a bikaku kagune. She has been stated to have fought the S-rated Bin brothers in a turf war. As proof of her abilities, she was the leader of the 18th ward.