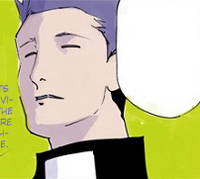 "Humans entrust their dreams even to stars billions of light-years away."— Miyuki Mikage, Tokyo Ghoul:re Chapter 110

Miyuki Mikage (御影 三幸, Mikage Miyuki) is a Rank 1 Ghoul Investigator. He is a member of the CCG's Suzuya Squad and is assigned to the 13th ward.

Mikage is a tall young man with extremely short hair spiked up at the top, which is light purple. His ears are pierced, adding to his unusual appearance compared to most investigators.

Little is known about his personality, though he seems to have a rather comical interest in Astrology and Astronomy, which as he put it, gave him constipation.

Mikage fought and subdued Big Madam along with his squad.

Mikage and Suzuya Squad landed on Rushima and began exterminating the remaining ghouls on Rushima.

During Juuzou Suzuya's fight with Kurona Yasuhisa, Mikage with the rest of the squad came up behind Kurona but their attacks were blocked. While Kurona was happy over Juuzou's "death," Miyuki and the rest of the squad attacked her. As she proclaimed him not to be important enough for the squad to mourn, he, along with others, burst into laughter, mocking Kurona for thinking Suzuya was dead, while the latter snuck up to Kurona from behind and attacked her.[2]

He respects Suzuya and is confident in his abilities, as he laughed with Suzuya Squad when Kurona claimed that Suzuya is not important enough for them to mourn and that Suzuya was dead.

Swordsmanship: Miyuki posseses proficient quinque handling skills, utilizing it to counter the SS-rated kakuja ghoul, Kurona, along with the rest of his squad.[2]