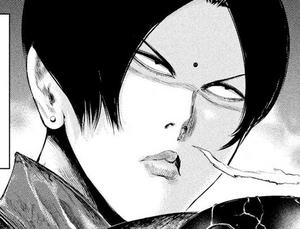 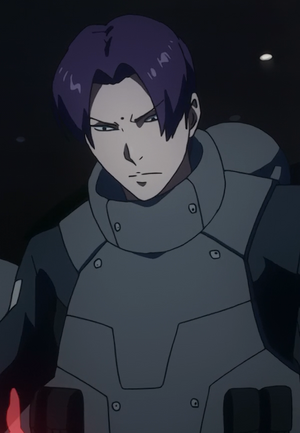 Trina Nishimura
Misato Gori (五里 美郷, Gori Misato) is a Rank 2 Ghoul Investigator who was affiliated with the 13th ward under the command of Iwao Kuroiwa during the events of Tokyo Ghoul. In Tokyo Ghoul:re she reappears where she is still working under Special Class Kuroiwa.

Misato is a very tall and fierce-looking woman with an androgynous appearance with short dark hair and a powerful gaze. She has a birthmark on the center of her forehead and she usually wears a stern expression on her face.

Like most investigators, she favors formal suits and opts to wear slacks as opposed to a skirt.

Gori participated in the operation against Aogiri Tree in the 11th Ward as a member of the 11th Ward Special Countermeasures Unit.[1][3]

After the Owl Suppression Operation, she was conflicted and emotional, refusing to believe the reports that Koutarou Amon had died. When she spotted Akira Mado, she took her anger out on her. She berated her for not feeling anything when she lost both her partner and a classmate, but was taken aback when Mado teared up, saying she loved them both.[4]

Misato met Iwao Kuroiwa together with Kuramoto Itou and Takeomi Kuroiwa after the Special Class Investigator Meeting following the Third Cochlea Raid and the slaughter of the Washuu Clan.[5]

Following the Clowns' attack on several CCG Branch Offices she defended the 22nd Ward Branch Office as part of the Kuroiwa Squad.[6]

After the CCG had arrived at the 9th ward, Misato shot down two of the Clowns and ordered the ukaku firing squad to aim for the balloons.[7]

On the day of Takeomi and Yoriko Kosaka's wedding, Misato caught Yoriko's bouquet by surprise.[8]

She was a part of the CCG Investigator team who battled the Taxidermied Owl. She was attacked by the Owl and managed to stay alive thanks to her quinque taking the blow but could no longer continue to fight.

She served at the TSC to support Iwao Kuroiwa's recovery. She receives passionate appeals from male personnel vying for her dedication, currently receiving proposals and pending.

She is secretly in love with him, though unable to confess her feelings out loud. When they worked together during the 11th Ward Battle, her embarrassment resulted in her acting gruff towards him to hide her actual feelings. Afterwards, she devoted time to attempting to learn to cook in hopes of conveying her affections towards him but even then, was unable to tell him. After he was declared dead during the Owl Suppression Operation, she became hysterical and refused to believe the reports.

Although she has not been seen working the field during investigations, she has instead been shown to perform well in larger combat operations such as the assault on the Aogiri base in the 11th ward, and the 20th ward's Owl Suppression Operation. Taking the role of ranged fire support for her allies in the field, Misato shows herself to be a capable shooter.

Misato using her quinque against clowns.