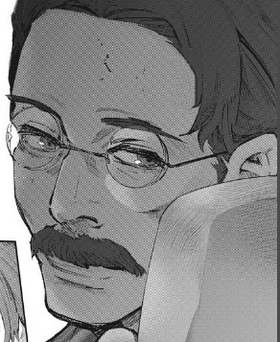 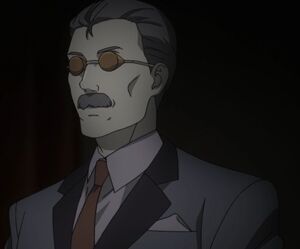 "Of course, skill is important. But what's even more important than the sword and shield are... those feelings. Feelings are what make you stronger."— Mirumo Tsukiyama, Tokyo Ghoul:re Chapter 48

Mirumo Tsukiyama (月山 観母, Tsukiyama Mirumo) is an extremely wealthy and eccentric ghoul, well-known within ghoul society for being extravagant. He is the father of Shuu Tsukiyama, and took part in the auction as a major bidder under the alias Croque Monsieur (クロックムッシュ, Kurokku Musshu).

He is an elegant older man, with a well-groomed moustache. He wears finely-tailored clothing, and small-rimmed and circular-framed glasses which often obscure his eyes. He has well slid-back hair, but has had an even-parted hairstyle as shown below.

Mirumo Tsukiyama is known as an extravagant ghoul and acts like an upper-class citizen, even within the ghoul society. He has shown compassion for his own son's deprived state ever since the Anteiku Raid; he refers himself as "Papa" when speaking of his son. Possessing the family's eccentricity, he also has a habit of screaming out of a window when in frustration and stating his thoughts out loud.

As the prestigious family's head, Mirumo holds every aspect of the demeanor of a typical gentleman. He does not resort to violence during struggles and prefers to talk things out, or even give up and surrender when he knows failure is inevitable as seen from the beginning of the Tsukiyama Family Extermination Operation. He won't hesitate to show exceptions when circumstances turn dire, as shown when he escaped captivity and destroyed a CCG van, after learning of the destruction of his son's escape helicopter.

Per his gentlemanly principles, he is very kindhearted and philanthropic, willing to spend his family's wealth on metal detectors during Dragon Arc, and later rebuilding the city afterwards. During the crisis, he has explicitly stated "the Tsukiyama family has come to the aid of the country"[4], expressing his genuinely generous and humanitarian motive.

He first appeared at the auction, competing fiercely with Big Madam for a famous actor, Yoshiki Ookura. He won their competition, and offered an apology to her for having won. Ayato Kirishima seemed familiar with him, offering an explanation when asked about the winning bidder.

When Tooru Mutsuki was placed up for auction, he took part in the bidding war against Big Madam and Kanae von Rosewald. Ultimately, he dropped out of the competition prior to the final bid.

In the aftermath of the Auction Raid, he escaped with his servants. Though having lost out on the opportunities the auction presented for finding "ingredients," he stated they would continue working for his son's sake.

When Mirumo's son got better and began going outdoors again, he expressed joy at the news. He was later seen with a few family servants and Tsukiyama listening to Matsumae about the hunting team's failure that led to Yuuma's capture.

Noticing there were doves marching towards his manor, he casually brewed his son coffee mixed with soporific drugs to keep him safe by ordering Matsumae to take care of the knocked out Tsukiyama.

Mirumo waited at his mansion's lobby for Special Class Koori Ui to enter, conversing with him casually in a respectful fashion while said investigator was filled with suspicion and ill-willed instead. Mirumo then stated that he would neither run nor fight, as he was willing to surrender under the conditions of "living as a human" until the very end, as he had before throughout his entire life. He was then escorted away by several investigators, bound with handcuffs and belts.

Matsuri Washuu later stated that he was being taken to Corniculum for questioning.

During the finale of the arc, he reappeared accompanied by Touka Kirishima, Renji Yomo, and Chie Hori. The group rescued Tsukiyama from investigators, and fled from the area in a stolen van. He explained to his son that he overheard that the helicopter he sent had been shot down, prompting him to escape custody to save his son.[1]

He aided the escape of various Aogiri Tree executives and associates during the operation on Rushima.[2]

Mirumo complied Shuu's plea to supply numerous detectors, with the prime minister's immense aid. He watched the process with a shocked Marude before excusing himself. As he left, he met up Ui by chance, who thanked him as they passed, to which Mirumo merely responded, "From one Japanese to another."[3]

Mirumo is an extremely caring father, deeply concerned for his son's well-being and proud of his many accomplishments. His diary entries show that he feels responsible for his son growing up without a mother, and tries to make up for this through loving his son enough for both parents. He worries greatly for his son's well-being, and has taken an active role in searching out some "ingredient" that will make his son's health return. After his son's recovery, he is greatly relieved.

Kanae was one of his servants, working at his behest to care for his son.

She was a highly trusted servant, given responsibility for his son since an early age. Mirumo seems to show a heightened affection toward her.

Mirumo was the greatly respected head of the Tsukiyama Group, which consisted a significant number of ghoul employees. Many of these employees and company heads owed significantly to Mirumo for his generosity and assistance over the years, and were fully prepared to sacrifice their own lives for their benefactor's successor's escape from the CCG.

Mirumo Tsukiyama is shown to be quite adept with his kagune. He also seems to possess considerable power, capable of breaking free and escaping the CCG custody on his own.