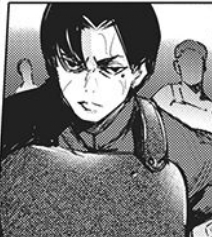 Gregory Lush
Mikito Urie (瓜江 幹人, Urie Mikito) was a Special Class Ghoul Investigator and the father of Kuki Urie. In the past, he was the leader of the S3 Squad and the superior of Iwao Kuroiwa.[5]

Mikito resembled a middle-aged version of his son with the only difference being that he had a single mole as opposed to his son's two.

Mikito was trustworthy and charismatic, having been the leader of the prestigious S3 Squad. He was also selfless, engaging the One-Eyed Owl so his subordinates could retreat to safety.

Mikito Urie captured Donato Porpora, eventually leading to the ghoul's time as an informant in Cochlea.[1] Later, he fought in a battle against the One-Eyed Owl and was killed in the line of duty, trying to restrain the Owl so his squad members could retreat.[5]