Edit
watch 01:48
'Tokyo Ghoul' Profile: Matsumae
Do you like this video?
Play Sound 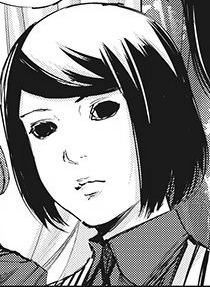 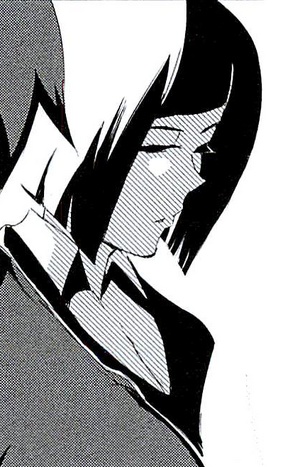 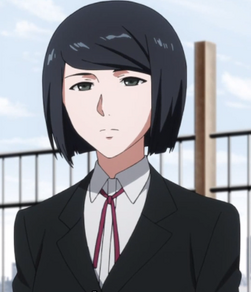 "If you have the intention of caring for everyone, in order to make the most of everyone's hope, I, Matsumae, as unworthy as I am... will continue to serve the new leader."— Matsumae, Tokyo Ghoul:re Chapter 46

Matsumae (松前, Matsumae) was a teacher at Seinan Gakuin High School, the homeroom teacher of Shuu Tsukiyama, a ghoul in the employment of the Tsukiyama family who was the General Manager of the Tsukiyama Group.

Matsumae is a young woman with dark black hair that is cut in a chin-length bob with bangs swept to the left side. Notably, Matsumae's eyes are depicted as almost fully black, with a slight volume of white on the sides of her sclera.

In the past, her hair was shoulder length and gradually became shorter as time progressed, eventually resulting in the present style.

Her clothing is similar to other fellow servants, varying depending on the task. During her last fight, she wears a black suit with white blouse underneath and black pants (at other times, there is a ribbon-like knot — black in the manga, red in the anime — dangling from her collar). In Shuu Tsukiyama's last flashback of her, she wore simply a blouse and skirt.

Young Matsumae in a domestic uniform.

Young Matsumae as a student. 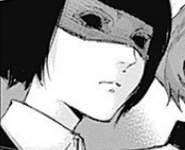 Little is shown of Matsumae's personality, but she appears responsible for keeping an eye on Shuu Tsukiyama while acting as his teacher. She's shown to keep a cool head, even when surrounded by ghoul investigators and commanded her group of ghouls in combat. Like her master, Matsumae retains a professional behavior even when under what is normally considered pressuring, such as a CCG extermination.

Before staying behind to hold off the CCG, she reveals she loves Tsukiyama like he was her little brother and was willing to sacrifice her life so he'd be able to escape. While fighting Hairu Ihei for the second time, she shows a brutal side of her in desperation in order to win and protect Tsukiyama.

Her thoughts are slightly opposite of her displayed calmness; for example, showing surprise and exclamation at Hairu's moves while the two were fighting.

When Tsukiyama was still in high school, his identity was found out by Chie Hori. The following day Matsumae called Tsukiyama out into the hallway during break time. There, she inquired her master if he wanted her to dispose of Chie Hori. However, he reassured her that he had things under control.

When Matsumae would train with Kanae, it was a common occurrence for Kanae to fall to the ground afterward, as she stated it was always like that. At an unspecified time, Matsumae noticed Kanae's true sex along with the other servants, and asked him if he was going to keep it a secret forever.

Matsumae accompanies another family servant, Kanae von Rosewald, to the Auction in search of something for their master. She comments on the excellent seating he's managed to obtain, and watches the events with interest. When he loses the bidding war for Tooru Mutsuki, she reassures Kanae that they can do their best to win the next item.

As the raid on the Auction begins, Kanae tells her to escape without him, as he has unfinished business. When Kanae was defeated by the Quinx squad, Matsumae appears and retrieves Kanae, blocking the path with a kagune wall that she dispatched from herself.

Matsumae is entrusted by Mirumo to keep Tsukiyama safe when they noticed doves marching towards the Tsukiyama family's manor. Driving Tsukiyama away to reach one of the Tsukiyama Group's companies for its helipad, she tells the awakened Shuu about the importance of his successful escape for the family due to his status as the sole successor. She refuses his plea to return and save Mirumo and escorts her young master to the company building successfully.

After successfully escaping to Luna Eclipse, Matsumae and Tsukiyama were welcomed by various company heads under the Tsukiyama flag, and asked to head upstairs for the rescue helicopter. Shortly after, however, it was noted that the CCG is advancing faster than anticipated, and thus Matsumae informs Tsukiyama that Mairo and she would stall some time for him before returning. Noticing that Matsumae is not bringing her mask with her, Tsukiyama realizes her intention of not returning and pleads for her promise to return. Remembering her vow to his master during his childhood, she answers she could not promise this time before turning away with a silent apology and a confession about her sibling-like devotion about him. Tsukiyama heads upstairs to the helipad with a sullen expression.

Facing Ihei for a second time, Matsumae is greeted by the investigator, who corrects herself as bidding a farewell instead. Matsumae is identified as the general manager and "Tsukiyama's Knight," believed to be able to do something about the situation. She manages to fight on mostly even grounds against the First Class Investigator, before being reminded by her past that Mirumo has once told her that feelings are what makes her stronger, then proceeds to pierce through Ihei's abdomen when she slipped on a blood puddle. Having dealt a fatal blow to the investigator, she was retaliated with a concentrated lightning bolt fired from the S+ rank quinque T-Human that proved difficult to block with her kagune shield. Being told to protect Tsukiyama, Matsumae sees Mairo leap in between the two combatants to take the finishing blow, but not before he decapitates the wounded investigator. Kijima then proceeds to confront Matsumae happily, telling her the names of Tsukiyama servants he's killed with his quinque, but is subsequently dealt a minor blow from the still-living Mairo's kagune. As the Associate Special Class Investigator turned back from the distraction, his right arm was cut off by Matsumae, leading to the chainsaw to dig into his forehead.

Though fatally wounded, he continued to thrash and attempt to attack her in a deranged state. Matsumae finished Kijima off, noting that she had finally avenged the deaths of her comrades. She prepared to face down the surviving trio of Investigators, and was shocked when Nimura Furuta used one of his comrades as a human shield in order to defend against her attacks. He then shoved his fingers into her eyes, blinding her and forcing Matsumae onto the defensive. Her attempts to anticipate his position through sound failed, and he used Rotten Follow to finish her off while apologizing to her master.

Matsumae is a servant of the Tsukiyama family household and regards to him as young master. She had the position of Tsukiyama's homeroom teacher when he was in high school. In the drama CD it is revealed that she has been with him since his early childhood, and was the one to be called out to when he was scared. Despite being Tsukiyama's attendant, Matsumae has revealed that she loves him dearly as if he was her little brother.

Matsumae and Kanae are fellow servants of the Tsukiyama household, and have a professional relationship. Having been the one to save Kanae during the Auction mopping up operation, she seems to look out for her. Likewise, Kanae seems to be worried about her well-being after she returns injured from the encounter with the CCG, and even asks her for advice.

Matsumae was also one of the first people to have noticed that Kanae was actually a female, and not male as she had led everyone to believe.

As a servant of the Tsukiyama Family, Mirumo is the main employer of Matsumae. It appears that Mirumo puts a huge amount of trust in Matsumae, to which the latter follows all orders without questions, even if it means to leave her master to his demise. Mirumo taught Matsumae to never hold back and that putting one's own feelings into the sword is the most important thing in a fight (as opposed to CCG's belief of withdrawing emotions).

Ghoul Physiology: Having been born as a ghoul, Matsumae possessed higher physical capabilities along with a koukaku kagune capable of detaching. 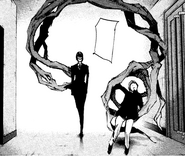 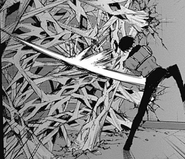 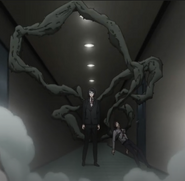 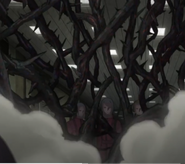