Edit
watch 01:29
Who is Matasaka Kamishiro?
Do you like this video?
Play Sound 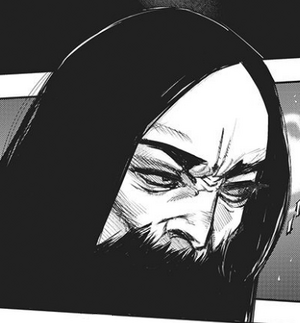 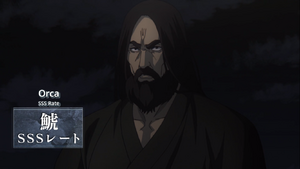 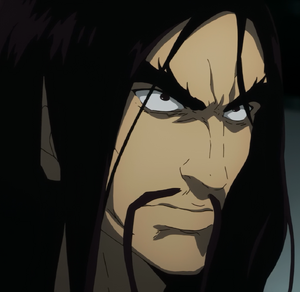 Andrew T. Chandler (√A)
Jarrod Greene (:re)
Matasaka Kamishiro (神代 叉栄, Kamishiro Matasaka) is the former leader of the ghouls in the 6th ward. He inherited the surname "Kamishiro" from his mentor. He looked after Rize Kamishiro, who was on the run from V at the time, as his foster daughter. Most people refer to him by his nickname Orca or Shachi (鯱, Shachi).

He is a strong ghoul, well-versed in the martial arts. When he was the leader of the ghouls in the 6th ward, he trained and strengthened his followers.[1] However, he was captured, due to Rize's actions,[3] and was sent to Cochlea.[1]

However, he was freed during the Second Cochlea Raid, and temporarily joined Aogiri Tree after an agreement with Yoshimura.

Shachi is a muscularly, bulky man, most likely middle-aged. He has strong facial features, with thick black eyebrows and a long wispy black mustache. His black scalp hair is long as well. After the Tsukiyama Operation, Shachi's beard has grown considerably, giving him a messy look.

Shachi when he was younger.

A wise ghoul who avoids killing people needlessly, Shachi is one of the more "calm" people in Aogiri despite his great power. It is possible that Tatara considers him "soft" due to this trait, but the exact reasons are yet to be confirmed. He has the habit of yelling out single word phrases in battle, which can be confusing as these words usually have a deeper meaning behind them.

He seemingly holds a respect towards humans, or at the very least the martial arts they have developed. In his life of mastering it, he says he has taken a human concept even further by combining technique with the strength of a ghoul. It could be said that he holds very little regard for species differences, and strives to live his life regardless of them.

Years ago, Shachi came across a young Rize when she fled from V and helped the exhausted ghoul. He decided to adopt her as his daughter and apprentice. However, as Rize grew, her appetite became more ravenous and she began overeating, which angered Shachi. This further strained the relationship between the two and culminated to a CCG attack in the 6th ward, which was implied to have been caused by Rize. Shachi was captured in the aftermath.[4]

Shachi was freed from Cochlea as a result of a raid by the Aogiri Tree and was approached by Eto Yoshimura, who used the idea of seeing Rize again to persuade him to join. Shachi met with Yoshimura later on. Yoshimura agreed to look after Rize in exchange for Shachi looking over his daughter, Eto, for him.[4]

When Kaneki's group was closing in on the nurse Taguchi who worked for Dr. Akihiro Kanou, Shachi showed up along with a few other ghouls to take her. He fought with Ken Kaneki and defeated him easily. Shachi then yelled at Kaneki for thinking he could stand against Aogiri Tree with that level of strength. He then called someone on the phone and told him they ran into the group he was talking about and if should they kill them. He hung up and said to Naki that they got what we came for and should go. He then left carrying the unconscious Taguchi on his shoulders.

He confronted Kaneki for a second time in Kanou's lab with their fight being seemingly more even this time. Kaneki noted that Shachi should not be that weak and was holding back against him. Kaneki then proceeded to thrash around Shachi enraged, as he believed himself to be underestimated; just before he tried to eat Shachi however, he was caught by Shachi who then dealt him heavy damage and revealed himself to be relatively unscathed. The previous attack brought the two ghouls to Kanou's inner laboratory where the doctor had been waiting for Kaneki. Shachi then stood by while Kanou attempted to persuade Kaneki to join him. When Yomo arrived to rescue Rize, Shachi secretly thanked his old friend. Shachi incapacitated Kaneki when the latter tried to kill Kanou and told him to know his powerlessness before fleeing with Kanou, much to Kaneki's dismay. Shachi later joined Eto and Kanou in the doctor's lab as they observed the battle between Kaneki and Koutarou Amon.

Shachi stood on a rooftop checking his phone.[5] For a while, he continued to be affiliated with Aogiri Tree and apparently influenced Ayato Kirishima.[6]

At some unknown time, he visited Nishiki Nishio and Renji Yomo, who had been taking care of Rize per his agreement with Yoshimura. Shachi told them that since Yoshimura's capture by his daughter, he could be saved, and urged them to be rid of Rize, as keeping her would be too dangerous for them. As he left, Nishiki asked him why he still cared for her. Shachi remarked that it was a stupid question and stated that it was his duty as a parent.[7]

Months after the Tsukiyama Family Extermination Operation, Shachi was pursued by the CCG's Reaper Kishou Arima and two other investigators, who were moving under direct orders of V to exterminate him. As Arima came forward to him, he crushed a bridge connecting him and the squad.

He quickly fended off two of the squad's members, while noticing that Arima had a strange pause in between his strikes, and noted that the cause may have been bad eyesight. As two other investigators ambushed him, he quickly defeated them, leaving Arima as the only threat. Realizing that Arima's weakness was his "blind spot," he tried to attack the investigator from said blind spot. However, the investigator dodged the attack and countered quickly by stabbing his left eye and piercing his throat with Narukami, before shooting Shachi point-blank with its concentrated Rc cells. Heavily injured, Shachi coughed up blood and fell to the floor dead, commending the investigator on his fighting ability despite having "such eyes," before calling for Rize to run.

Rize is Shachi's foster daughter, he discovered her at a young age after she had escaped from V. He took her in and taught her how to read and the value of independence, after some time he allowed her to use the name Kamishiro. As she got older, Rize became more and more rebellious and brushed off Shachi's warnings against binge eating. Eventually her habits attracted the CCG's attention to the 6th ward, which resulted in Shachi's capture, and caused him to get sent to Cochlea. But despite Rize's past indiscretions he still cared for her deeply, and sacrificed his life to protect her by fending off V.

When they first met they exchanged clashes with each other that resulted in Shachi winning. He tells the half-ghoul that he is too naive and that it is through both training as a ghoul and a human (in the martial arts) that he was able to become as strong as he is now.

Shachi presumably knows Yoshimura well, as he refers to him as an old friend. He trusts Yoshimura to take care of Rize.

While the two were never shown interacting in the main series, an omake features Ayato asking Shachi how he got so strong. Tatara implies that Shachi may have become a mentor to the younger ghoul at some point, criticizing his influence on Ayato.

Shachi is one of the most powerful ghouls known to the CCG, as his strength was deemed to be greater than Noro's by Shinji Michibata.[8] Furthermore, he was able to defeat Ken Kaneki, an SS-rated ghoul, twice without much difficulty.

Ghoul Physiology: Having been born a ghoul, Shachi possesses enhanced physical capabilities along with a bikaku kagune.

Master Hand-to-Hand Combatant: Shachi is knowledgeable of many different styles of martial arts, having most likely mastered and refined them through the amount of damage he can do with a mere punch or kick. 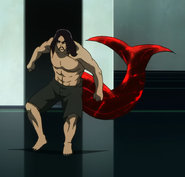