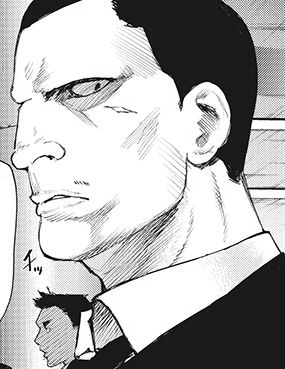 Tyler Walker
Masami Umeno (梅野 雅巳, Umeno Masami) was a Rank 2 Ghoul Investigator and a member of the Itou Squad.

Masami was a tall, heavy built investigator. He had short cropped, dark hair slicked back from his face and a scar beneath his left eye.

Masami came across as gruff and unfriendly to rival squads, the Quinx Squad in particular. However, he was one of the first to praise Mutsuki after his double promotion and addressed him by his nickname, which showed a more humble and friendly side.

He was first introduced when Tooru Mutsuki crashed into him in the hallway, which caused Masami to give him a harsh glare. Afterwards, he insulted the younger investigator and gossiped with the others in Hirako Squad about the Quinx Squad.[6]

When Haise Sasaki used his powers and lost control, Masami provided support for his comrades while they took him down. Afterwards, he remained on standby while the crisis was resolved.[7]

He joined his squad during the Auction raid and encountered the Clowns, Uta and Roma Hoito.

Half a year after the award ceremony, he confronted Mutsuki and stated that he was wrong before, and that he looked forward to more impressive results from him.

Masami and his squad joined the Quinx squad after Sasaki headed off to the top floor, clearing ghouls until they confronted Noro. He was assigned to fight on the front with his squad leader, Itou, but was immediately killed by Noro's kagune which went through him to devour Nezu.[4]

Buru: Not much was shown. However, Buru appears to be a long sword, similar to Tsunagi.