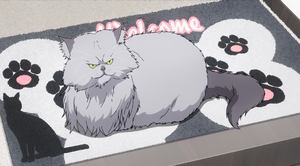 Madeleine Morris
Maris Stella (マリスステラ, Marisu Sutera) is a pet that lives in Akira Mado's apartment. She is depicted with long hair and a bushy tail in both the anime and the manga. In the anime, the cat greets Koutarou Amon at the door as he enters Akira's apartment.

In the anime, the cat is a long-furred gray cat with darker fur on her ears and tail. She has yellow eyes and a grumpy expression.

Maris Stella's personality is unknown so far. She appears to be affectionate towards Akira, but hostile to anyone else.