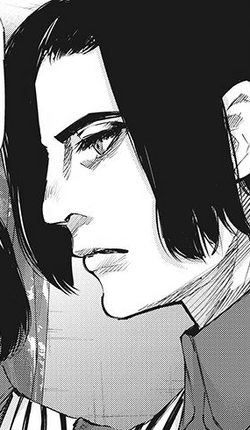 Nazeeh Tarsha
Mairo (マイロ, Mairo) was an employee to the Tsukiyama family.

Mairo was a male with dark hair that parts to the side of his face revealing his forehead.

Like Matsumae, little is shown of his personality aside from treating the Tsukiyama family with respect as his employer. He is shown to keep a professionally blank expression as well, implying a calm demeanor. He was dedicated towards the Tsukiyama family, and was the perfect example of Mirumo's philosophy: to put one's feelings behind their actions, made them stronger.

Mairo is seen hunting with Matsumae and Yuuma when they were ambushed by Kijima and Ihei. He later appears standing beside a recovering Matsumae in the Tsukiyama residence along other employees and the Tsukiyamas.

After Tsukiyama and Matsumae escaped to Lunar Eclipse, Mairo appears near the top floor and was relieved to see Tsukiyama safe. He then heads downstairs to fend off the CCG raiding squad along with Matsumae to stall time for their young master.

During the battle between Matsumae and Hairu Ihei, he leaps between the fighters, tells Matsumae to take care of Shuu and takes a blow intended for Matsumae from T-Human. He is blown in half, but is still able to use the momentum to decapitate Ihei as his upper body falls to the ground.

Assumed dead, Kijima starts up his quinque to challenge Matsumae, however, Mairo reveals he is still alive, berating Kijima for underestimating his vitality, and impales Kijima through the shoulder with his kagune and distracts him long enough for Matsumae to finish the investigator off.

Mairo is shown to not just be simply loyal to Tsukiyama, but also sincerely concerned about his well being.

Matsumae and him are sometimes seen working together, such as when hunting for rations.

Ghoul Physiology: Having been born as a ghoul, Mairo possessed great physical capabilities.

Koukaku Kagune: Despite being a heavy-type, Mairo's kagune is a thin, arm-length blade the width of his arm. It can also be utilized as a short javelin, connected to the body through threads.