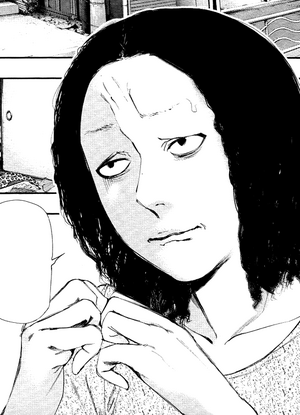 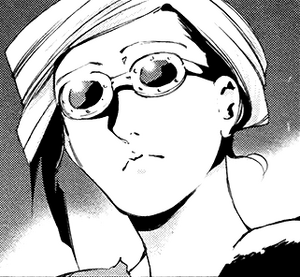 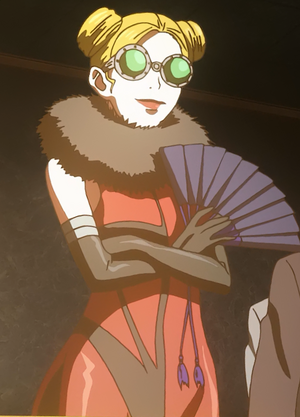 Lydia Mackay
Maiko Abe (阿倍 麻衣子, Abe Maiko) is a member of the Ghoul Restaurant, where she goes by the alias Madam A (マダムA, Madamu A).

Maiko is a slender but voluptuous, fair-skinned woman with a feminine but classical taste for fashion. She has shoulder-length black hair, while as Madam A she wears a blonde wig that is tied up in two buns, although during the Auction Raid it is tied up in a single bun. In the Gourmet Arc, she is seen wearing a red body-fitting dress with a black fur collar, and black gloves that reached above her elbows. This outfit was accessorized with a pair of green circular-rimmed shades and a blue fan. During the Auction Raid she is seen retaining her shades but this time wearing a lavender dress with short sleeves and long dark purple gloves. She also wears thin ribbon-like accessory around her neck.

Thought to be sadistic, Maiko seemed to show some emotion over the loss of Taro, her Scrapper. She is also shown to have an intuition which has not failed twice, narrowly escaping when Ken Kaneki attacked the Ghoul Restaurant with Shuu Tsukiyama's assistance, and during the auction, where she left moments before the CCG streamed in.

Before becoming Madam A, Maiko lived a poor and unsatisfying life. When she was starving she met Dr. Akihiro Kanou by chance and attempted to devour him. Unexpectedly however, she was knocked back by a bodyguard and offered a job by Kanou that would provide the lavish life she has now as Madam A.

Madam A was the owner of the scrapper Taro that participated in Ken Kaneki's dismantling show at the Ghoul Restaurant.[2]

After MM, or Shuu Tsukiyama, had heavily wounded Taro, she accepted MM's proposed deal: Taro would become the meal of the Ghoul Restaurant's guests as Kaneki's replacement. In exchange, MM would provide her with a new Scrapper.[3]

To find Dr. Akihiro Kanou, Ken Kaneki's group searched for Madam A in the Ghoul Restaurant while destroying the establishment. With the help of Kurona Yasuhisa and Nashiro Yasuhisa, she fled the attack successfully.

Madam A was later hiding in a conex near a dock where she was met by Shuu Tsukiyama, who — along with the rest of Kaneki's group — had tracked her down. She was assisted by Kurona initially to flee; however, when Kurona found them outmatched, she left Madam A to be captured and fled alone.[4]

Madam A was seen to be participating in the ghoul auction. When Tooru Mutsuki was brought out and revealed to be a one-eyed ghoul however, Madam A got nervous from her past interactions with one-eyed ghouls (Kurona Yasuhisa, Shiro and Kaneki) and left in a hurry. From a window, she witnessed CCG forces gathering outside and preparing to attack. She soon escaped the Auction by crawling through air ducts.

Madam A became interested in agriculture where she understands the value of food and life and she has a cow name Saburou-chan.