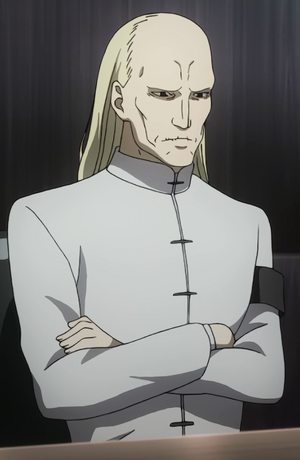 J Paul Slavens
Kyouji Misaka (御坂 矜持, Misaka Kyōji) was the Warden of Cochlea. He was killed during Aogiri Tree's attack on the prison, and succeeded by his deputy, Shinme Haisaki.

Misaka was an middle-aged man, skinny and pale. He had long blond hair, but was bald on the top of his head. Misaka wore a white tunic with a black armlet.

Diligent and cruel, he was chosen to be Cochlea's torturer following his career as an investigator. He showed his coldheartedness even in his interactions with his subordinates, inducing strong feelings of fear in them.

As an investigator, he rose up to the rank of Associate Special Class.

Due to his cruel and diligent personality, he was chosen to be Cochlea's torturer. After taking office in Cochlea, he steadily rose to the top, until he reached the office of Warden, the highest position in Cochlea.[1]

Misaka participated in the meeting concerning Aogiri Tree's actions in the separate wards.

During Aogiri's attack on Cochlea, he attempted to crush and kill Tatara using his quinque, but failed to do so, and was impaled by Tatara.[6]

Being a former Associate Special Class, he is bound to be very strong at fighting ghouls. Fitting his role as the Warden, even his quinque appeared to have the special trait of imprisoning the victims, then swiftly killing them. However, he was no match for a ghoul as powerful as Tatara.

Although at the time of his death, little was known about his quinque and it's origins in particular. It is believed to have received the nickname Terry (English and Irish: from the common Norman personal name, T(h)erry (Old French Thierri), composed of the unattested Germanic element þeudo- 'people', 'race' + ric 'power'. Theodoric was the name of the Ostrogothic leader (c. 454–526) who invaded Italy in 488 and established his capital at Ravenna in 493. He was known to imprison his captured foes in a similar fashion to the chosen method of the attack displayed above.)

The Japanese pronunciation of the English word "Warden" is Kanshinin which was believed to be the origin of Misaka's name.