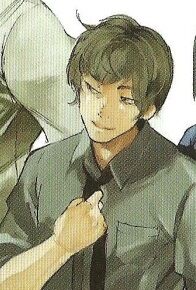 Void: Chapter 1
Kyouhei Morimine (守峰 恭平, Morimine Kyōhei) is a police officer working in the 8th ward who cooperated with the CCG on a case involving a missing high school girl. His investigation sees him work alongside Koutarou Amon, as the suspect is believed to be a ghoul.

Morimine makes an appearance in :re.

Morimine comes across as a harsh individual, easily annoyed and bitter. However, beneath his tough exterior, he turns out to have a keen intellect and a kind nature. As a detective, he is surprisingly astute and proves to be far more capable than he initially seems.

He also appears to be empathetic and understanding to different circumstances, evident by his objective view on the necessity of ghouls' feeding nature to survive. Even after learning of his deceased girlfriend's fate, he does not seem to hold a grudge and even thinks of the killer as unfortunate.

Morimine has keen intellect and astute instincts that often assists him in his area of work.

He has shown have some skill with firearms, as seen when he shoots down a chandelier from a distance in one shot.

The two men initially clash, due to Morimine's rude personality. However, they quickly come to an understanding and learn to respect each other. Morimine is in awe of Amon's incredible physical ability, shocked at the strength of a ghoul investigator in action.

Though she is the Ghoul responsible for the death and subsequent consumption of his girlfriend, Morimine expresses sympathy towards her and acknowledges her remorse. He expresses interest in learning more about her situation, and what drove the woman to do the things she did. As such, he's an unusual human able to recognize Ghouls as complex individuals, rather than monsters.

Not much can be said about their relationship, but it is clear that they loved each other very much. After her disappearance, Morimine was inspired to become a police officer, after seeing how inefficient they were in handling her disappearance. Years later, Morimine is distraught after finding her remains in the Utsumi's house.