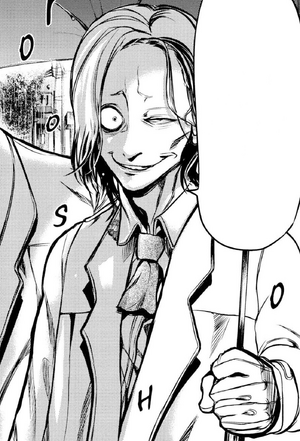 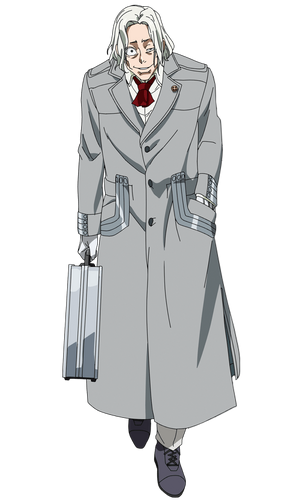 "When you’re in front of the enemy, even if your hands are trembling, fight. That's what it means to be a 'professional.'"— Kureo Mado, Tokyo Ghoul Chapter 29

He was a quinque fanatic. Among others, he killed the ghouls Applehead and Ryouko Fueguchi. He was killed while tracking down the Daughter ghoul and Rabbit.

Kureo was a middle-aged man with sunken cheeks that reminded Amon of a dead person. He had long, stringy, white hair and was often seen with a huge grin on his face. He had a slim body and stooped shoulders, causing him to appear considerably shorter. He was often seen with one bulging eye, and one squinting eye.

He wore a white dress shirt and light dress pants, and black dress shoes. He wore a dark red necktie and a grey trench coat, adorned with shiny, silver accents. He was characteristically seen wearing white gloves. He was rarely seen without his briefcase.

In his younger days, Kureo's expression was normal and his hair was shorter.

Kureo in his younger days.

Mado was known for his obsession for ghouls and their kagunes for the purpose of making quinques. He frequently waited for the ghoul he hunted to bring out their kagune in order to obtain it, according to how all investigators do when looking forward to a new quinque. His uncommon enthusiasm toward ghoul hunting stemmed from when his wife, Kasuka, was ordered to hold off the One-Eyed Owl alone and died about ten years previously during an investigation in the 24th ward. This tragic event left him and his daughter, Akira, devastated.

As an investigator, years of veteran-ship and expertise had gave him a deep insight and intuition to sense a slight detail to determine someone's status as a ghoul. His deductions had led Amon to admire and learn from him as mentor to mentee. While Kureo was violent and cruel towards ghouls, to his fellow humans and brethren-in-arms he was just an ordinary old man with good work ethics, though considered weird by many people. He was capable of loving and caring, as indicated that he was married and acted as a very dedicated teacher to his juniors.

Ten years ago, he used to be partners with Yukinori Shinohara and Fujishige Iba during the Owl case. Mado seemed eccentric and senile from outward appearance, but he was one of the best investigators around as an expert in combat and a pioneer in quinque engineering. According to Akira, he never wanted nor attempted to achieve a higher rank than First Class Investigator, saying it was all he needed to go after the Owl and looked down on those who blindly chased ranks within the CCG.

However, the grief from his wife's death created a turmoil of rage targeted at all ghouls, and this made him rather sadistic towards ghouls. This was showcased when he laughed at and tormented Hinami about the deaths of her parents and told her she would join them soon enough, even though she was only a child who had emotions just like humans. Along with this, he belittled Hinami's mother and despite her desperate pleas, took immense pleasure in watching her death. This showed his extremely violent, almost psychopathic nature towards all ghouls and his inability for empathy and understanding for others in that sense.

Mado had a family comprising his wife Kasuka Mado, and daughter Akira Mado, both of whom were ghoul investigators. After his wife’s tragic death by the hands of the One-Eyed Owl, Mado became sterner about exterminating ghouls, and wished to elevate his abilities, via collecting different kagune and making a variety of quinque. Kureo also mentioned his sole reason for living was to avenge his wife, by killing the one-eyed ghoul with his left hand where he wore his wedding ring; and for that purpose, he covered his hand with a glove. His squad encountered the Non-Killing Owl in what was thought to be the One-Eyed Owl's third attack in the 2nd ward. The Owl proved too powerful for them until the young Kishou Arima gathered the quinques used by the Special Class Investigators and defeated the Owl.[4]

Some time later, Mado, accompanied by Yukinori Shinohara, was investigating the kakuja ghoul known as the Corpse Collector, Arata Kirishima. He later defeated Arata, and decided to commence a new investigation to search for and exterminate Arata’s children: Touka and Ayato Kirishima.

Under the supervision of Kishou Arima, Mado was partnered with Koutarou Amon, a new recruit that just joined the CCG workforce from the Academy. Mado first referred to Amon as a "baby bird," because Amon, though inexperienced, still doubted Mado’s intuition; for he found Mado's predictions to be ridiculous and unbelievable. They were sent on a mission to investigate Kie Muramatsu or Applehead. Mado showed her a Medical Certificate, which stated that Kie's Rc cells level was between 200 and 500; the levels of a healthy human. Mado apologized for suspecting her to be a ghoul. However, when he reassured Amon that she was indeed a ghoul, Amon doubted him and walked off the investigation. Later on, when Amon was tricked and attacked by Kie, Kureo quickly intervened and killed Kie. However, it was all according to his plan to "test" Amon. Mado advised Amon to be careful, and fight even if his hands trembled during battle.

In Tokyo Ghoul the anime, during the investigation of No. 696, or Asaki Fueguchi, Mado and Amon showed up in front of his clinic, where they met Yakumo Oomori. During their face-off, Mado tried to trap Yamori with his quinque, but Yamori escaped. After Asaki was left with no choice but to show himself, Kureo annihilated him, and later made his kagune into a quinque, Fueguchi One.

Mado also investigated the whereabouts of Asaki’s family, which was confirmed when Asaki’s ghoul mask was brought before him by Amon. After sometime, Mado and Amon scrutinized the part of the 20th ward where Asaki’s family was thought to have resided. They were suddenly approached accidentally by Ryouko Fueguchi and her daughter Hinami, much to their convenience. Mado mocked the fact that ghouls imitated humans; for Ryouko told Hinami to run in an attempt to save her daughter’s life. After seeing that Ryouko was a powerless ghoul, Mado ordered her to say her last words, as he took out his quinque and prepared to kill her. Before Ryouko could finish her sentence, Mado had already decapitated her. He later used her kagune to create another quinque, Fueguchi Two.

On the night of Kusaba’s murder by a ghoul, Mado intervened in the battle between Amon and the ghoul, whom he noted to be “Rabbit”. He informed Amon that Rabbit possessed an ukaku Rc type; depending heavily on speed and easily running out of stamina. However, Mado did not manage to capture Rabbit, but instead slashed her upper shoulder blade. On the day of Ippei Kusaba’s funeral, Mado and Amon skipped it to do extra sessions on their investigation regarding “Rabbit” and the “Daughter” ghoul.

When Touka Kirishima and Ken Kaneki visited the 20th Ward Branch Office to gather information, Mado came and they were introduced to them as students from a nearby high school. However, Kureo became suspicious when Touka showed signs of being hurt in the arm when she bumped into him. Furthermore, he expressed his interest in knowing what details they had to give, requesting that they go further into the building by passing through the Rc Scan gate. When they refused, Mado forcefully pushed Kaneki through the gate, but upon getting no response, he let them leave the office.

Mado then visited Kasahara Elementary school nearby the Kasahara River with Amon, but upon not finding any evidence of the Daughter ghoul according to where the informants said it would be, he concluded that the two identities were made up by the two students, Touka and Kaneki.

During the night Hinami ran away from Anteiku, Mado approached her and Touka under a bridge, where he called Amon to come to his aid. Since Amon was stalled by Kaneki, Kureo, therefore faced Touka single-handedly. Once he was insulting the existence of ghouls, Touka charged toward him. However, he was effortlessly winning, and later on, he brought out Fueguchi Two, taunting Hinami. He eventually beat down Touka, and mocked Hinami by telling her that her parents’ kagune made a fine quinque, and that she was going to be next. Mado struck to finish off Touka, but had his right hand unexpected cut off by Hinami’s kagune. Upon seeing her chimera kagune, Mado became fascinated with it, saying it would be good material. He then demanded to make it his quinque, but his left leg was dismembered by Hinami after attacking her with his left hand. Since Hinami refused to finish him, Mado took the opportunity to express his hatred for ghouls and tried to finish off Hinami with his last force. Before Mado was able to reach Hinami, his throat was slashed by Touka. During his last breaths, he spoke about his strong desire to live just to kill and bury the one-eyed ghoul with his left hand.

His funeral was held at the CCG Main Office in the 1st ward.

During the fight against the Non-Killing Owl, Shinohara imagined Kureo talking to him.

Kasuka was Kureo's wife and the love of his life. Kureo met Kasuka when he was 20, while she was his instructor. He was taken into Kasuka's family, meaning that he adopted the surname "Mado."[5] When she was killed by the One-Eyed Owl; the event left him with a deep, genocidal hatred for all ghouls, and wished for vengeance against the Owl.

After his wife's death, Kureo raised Akira as single father and they had a deep bond. Later, Akira joined the CCG after her father's death.

According to Akira, Kureo once mentored Arima in his youth.

Amon was Mado's last partner. When they first met, Amon initially thought of Mado as strange and questioned his intuition. After he was saved by Mado from Applehead, Amon saw him as someone to look up to, and strove to learn much from the veteran investigator. Both individuals took pride in being each other's partner. Kureo was also very proud of his achievements and left his quinques in his care.

Shinohara and Mado were paired together at some point before Amon came to the 20th ward.

Mado noted Touka to be better than the average ghoul and predicted she would soon become a dangerous threat to the CCG in the near future, and smarter too as she knew when to flee. When Touka removed Kureo's gloves and saw the wedding band he wore, she was disgusted at her killing of the investigator.

Mado was disgusted at Ryouko's and Hinami's care for one another, as he saw all ghouls as monsters and thus was disgusted at them for "imitating human behaviors." Mado killed Ryouko before lying about giving her time to say her last words.

Mado was disgusted at Ryouko's and Hinami's to care for one another, as he saw all ghouls as monsters and thus was disgusted at them for "imitating human behaviors." Mado sadistically enjoyed provoking Hinami with quinque made from her parents kagune, and found her kagune to be even more fascinating than her parents'.

Marude criticized Kureo, deriding him as a quinque maniac and stated he expected Kureo to be killed in action. However, he apparently respected Kureo quoting him when he confronted Yoshitoki Washuu about the Washuu Clan's true species and stated he was an old friend. 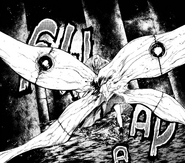