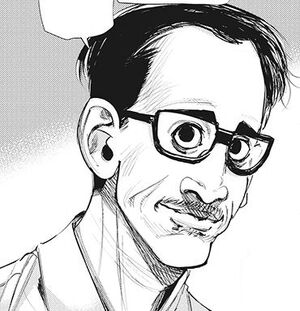 Bill Jenkins
Kurei (呉井, Kurei) was the president of the Apollo Group, a subsidiary of the Tsukiyama Group. He owned Apollo TEC, Apollo Forestry, and the Luna Eclipse building.

He was a long-time associate of Mirumo Tsukiyama, and deeply loyal to him.

Kurei appeared to be a middle-aged man with a rather long face and dark hair, but a receding hairline, revealing much of his forehead. He had a spares mustache and prominent nose and ears.

Little is known about his personality, but he is shown to be considerably loyal towards Mirumo Tsukiyama, who most likely helped him start his business, sacrificing himself in a attempt to save his son from the CCG.

Mr. Kurei was summoned to the Luna Eclipse along with many other members of the Tsukiyama Group, in order to defend Shuu Tsukiyama from the CCG. Along with Tycho Johannes and Jirou Asada, he greeted the young master and Matsumae at the building entrance and saw him off. He later makes light conversation with the other company presidents, while preparing to engage the Ghoul Investigators sent to kill Shuu.

He was later chainsawed in half by Shiki Kijima.

While their relationship remained unexplored, they appeared to be close friends and longtime partners. Kurei's respect and loyalty for Mirumo went so far that he went on a suicide mission for his son, Shuu.

Ghoul Physiology: Due to his ghoul nature, Kurei had an Ukaku kagune.