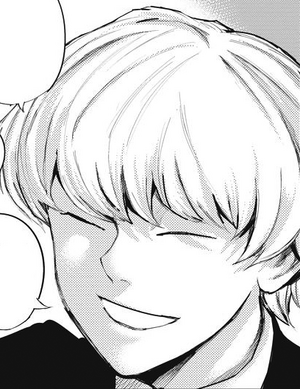 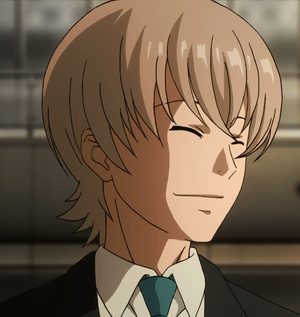 Justin Briner
Dallas Reid (Re: Ep. 2)
Kuramoto Itou (伊東 倉元, Itō Kuramoto) is a First Class Peacekeeper and the leader of his squad.

Kuramoto is a young man with shaggy, light-colored hair. He wears the dark suit typical of an investigator, and seems to always be smiling with his eyes closed. This gives him a mischievous quality. 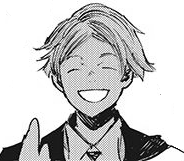 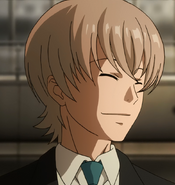 Kuramoto comes across as a lighthearted and friendly individual, always smiling and making playful comments. He offers encouragement and information to Haise Sasaki, and chides his teammates for their attitudes. However, there are hints that his friendly demeanor may not be entirely genuine — he follows up chiding his comrades by criticizing the decision to use one-eyed ghouls as investigators and calls them "scary." After the Auction mission he has abandoned any misgivings and is friends with the Quinx.

Prior to the Owl Suppression Operation, Kuramoto had been in awe when Take Hirako told him about Kishou Arima's blank testaments, interpreting it as Arima's understanding of his own undefeated record.[2] Later, he participated during the operation as a member of Squad 3,[3] he engaged in the battle against the Black Dog[4] and finally managed to defeat her, though she broke his quinque in the process. However, Ken Kaneki appeared to save Irimi,[5] temporarily subduing Kuramoto and his squad, breaking a spare quinque lent to him by Ayumu Hogi.[6] He later regrouped with the other squads[7] and engaged Eto in combat before standing back to watch Kishou Arima fight the One-Eyed Owl.[8][9]

After the Shimoguchi, Mado, and Hirako squads finished their meeting, Kuramoto followed Haise Sasaki and greeted him, telling Sasaki that unlike Shimoguchi, he believed in sharing information with other investigators and talked about the ghoul named Serpent; who was recently hunting fellow ghouls.[10]

He participated during the Auction Mopping-up Operation under Hirako's leadership, fighting alongside Takeomi Kuroiwa. He and the others confronted the Clowns.[11] Whilst Hirako and Takeomi took on Uta and Ganbo, Itou fought against Roma Hoito.

Kuramoto was promoted to a First Class Investigator and given leadership of the Hirako Squad, now Itou Squad, as Hirako was reassigned as Arima's assistant.[12] He showed concern for his former superior and was unsure about his position as leader. Kuramoto was one of the voters in favor for Sasaki's Operation Mask[13] and later worked with Koori Ui in tracking down suspected Aogiri Tree ghouls in the 18th ward.[14] He and his squad participated in the Tsukiyama Family Extermination Operation and eventually teamed up with the Quinx Squad and had a bad feeling[15] before they fought Noro. During the fight, he was left severely wounded with a rib protruding from the left side of his chest.[16] He went on to tell Shinji Michibata to leave him behind, to which Michibata ignored and patched him up.[17]

In the aftermath of the battle against Noro, Itou was seen silently looking at Michibata's covered corpse, ignoring the new investigators on the scene.[18]

Some time after the events of the extermination operation, Kuramoto, Takeomi, and Hirako visited the cemetery, collecting upon the grave of their allies who died during the operation. Kuramoto was particularly touched and apologized to the members of his deceased team for not having been up to the task as a leader, a position he never really desired.

He left Tokyo and transferred to a Kansai branch of the CCG. As a senior investigator, he cracks down on ghouls with his subordinates. He is having fun with his fake Kansai accent.

Hirako was Itou's previous superior in the Hirako Squad. Having formed a long-time relationship, Itou was constantly concerned with Hirako's well being. Itou was respectful towards Hirako and obeyed him. After being informed of Hirako's defection and service to the new One-Eyed King he is despondent wondering if Hirako ever trusted him.

Being one of the first investigators to openly treat Sasaki kindly, they quickly formed a friendship. With Sasaki, the two addressed the other by given names[10] and Sasaki felt comfortable enough with him to share some of his problems with him over drinks. His discovery of Sasaki's defection by killing Kishou Arima and causing a prison riot at the Cochlea leaves him distraught. He is surprised that Sasaki would be treacherous and ungrateful despite the CCG's trust in making him a prominent ghoul investigator.

Being fellow members of the same squad, Itou and Takeomi share a close bond as comrades. The two have fought together during the Auction against Noro, the Rushima Landing Operation, and the Clown Siege, assisting and backing up each other.

Initially, Michibata thought of Itou as an "airhead" but later he came to like his lighthearted attitude. The two got along well enough to go out and have drinks occasionally as well as other friendly interactions. During the battle with Noro, Michibata was unable to leave behind a wounded Itou for his own safety and tended to his injuries. Later on, Itou sadly stared at Michibata's corpse covered under a white cloth.

Like many of his fellow ghoul investigators, Itou respects and admires Arima, viewing him as a symbol of strength. During Sasaki's Christmas party, Itou claims that he heard a rumor from Hirako about Arima defeating a ghoul with an umbrella instead of IXA, and seemingly believed in it. Itou also claims that Arima is the one investigator all the ghoul investigators look up to.[19]

Itou is one of the first ghoul investigators who wasn't indifferent towards Saiko and the Quinx. Itou and Saiko were on friendly terms and played video games together on Christmas.

Following Hirako and Sasaki's defection from the CCG, Itou discussed the two of them with Ui, expressing disbelief and sorrow over their betrayal. Ui then advised Itou to let go of whatever personal feelings he held towards the situation or he may end up losing the things most important to him.

Itou and Hachikawa knew each other as fellow ghoul investigators. Itou once came across Hachikawa wearing a suit and teased that it didn't really fit him. Annoyed, Hachikawa told him to shut up.

Itou and Hogi have a casual relationship. Itou was friendly towards Hogi and greeted her when he came across her and Hachikawa in suits.

As a First Class investigator and the leader of his squad, Kuramoto is proficient in combat. He has been shown to be able to hold his own against Roma Hoito, a ghoul with eight tentacles, for a short period of time. His personal quinque, Senza, is shown to be a spear which he wields with proficiency. During the Owl Suppression Operation, he borrowed one of Ayumu Hogi's quinque swords against the Black Dobers and Kaya Irimi had commented that his skills were impressive. Kuramoto was shown to have great durability managing to converse properly even after Noro sent him flying with his kagune.