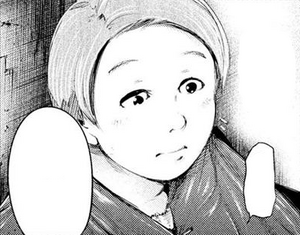 He wore the typical attire of Aogiri Tree's members.

Usually quiet and reserved, Kouto cared for the people around him, was brave enough to try and steal food and risked his life to protect his mother.

Kouto participated in the Anti-Aogiri meeting of ghouls associated with Banjou where they planned to escape from the 11th Ward Base.[3]

Because he was hungry, he tried to steal meat when he, Banjou, Kaneki and the others were dismantling human bodies under Aogiri's orders. Banjou took the punishment in his stead.[4]

After the failed escape attempt he was brought in front of Kaneki with his mother. As the mother and son trembled in fear, Yamori demanded Kaneki to choose one of them to die in order to save the other. Failing to choose someone, Kaneki watched as Kouto was strangled to death by Yamori in front of his mother, who was briefly murdered by the same man who killed her son afterwards.