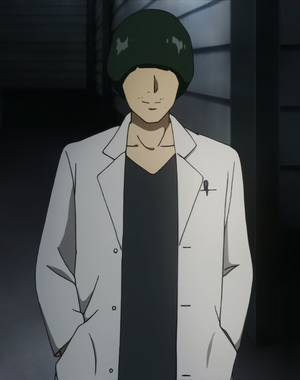 He used to be a researcher in the GFG in Germany.[1]

Kouitsu is a tall average man with a black shirt and pants. He wears a lab coat and has big black hair that covers his eyes completely. After the timeskip he has grown facial hair, namely a thin mustache.

He is a friendly and cooperative individual. He is also resourceful, giving Koutarou Amon the Arata when he needed it the most. Despite this apparent benevolence it has been suggested he is less interested in the ethics of science, and more interested in seeing whether a theory will actually work such as the creation of the Quinx after examining Ken Kaneki's body after his capture.

He later delivered an Arata quinque and the revised version of Doujima to Koutarou Amon in the neck of time to combat Kaneki.[3] Afterwards, he provides Juuzou with new prosthetic metal legs.

Chiyou gave Ginshi Shirazu his new quinque, Nutcracker while marveling at its uniqueness for its chimera properties. He was surprised when Shirazu vomited and expressed concern for him.[4]

Chigyou was briefly mentioned during Dr. Akihiro Kanou and Tatara's conversation following the retrieval and examination of Shirazu's corpse. Dr. Kanou praised him for having invented the technique used to create the Quinx.[5]