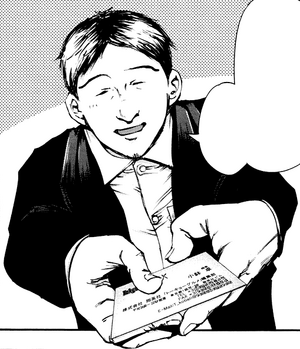 He was a fairly tall man, with light colored hair parted in the middle of his scalp, and falling to both sides. Kobachi usually displayed a friendly smile on his face.

He has a fit body as he visits the gym regularly.

As an editor of a gourmet magazine, he is knowledgeable about food and restaurants in general. He is carefree and cheerful.

When it was revealed to Kobachi, Ken Kaneki and Ami that they are meant to be the meal, he treated it as a joke and instead thought it was some kind of special event for a theme restaurant.

Kobachi, who planned to write an editorial for his magazine, was baited into the Ghoul Restaurant by Mitarai.[3] He was told to take a shower, dress in a suit and tie, and wait for the show room. Once there, he was the first to be cut up by Taro as part of the dismantling show. His flesh and blood was served as a chewy hors d'oeuvre to the restaurant ghouls to feast upon.[4]