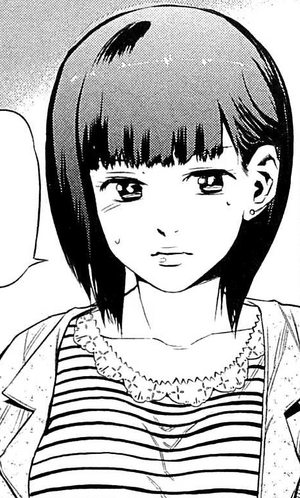 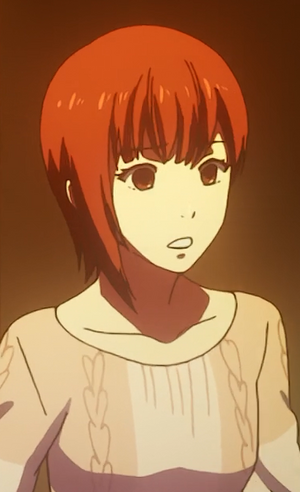 "If I had been born a ghoul I think I would have killed people. I... was just born as a human by chance, and because of that I'm able to live a lovely life."— Kimi Nishino, Tokyo Ghoul Chapter 35

Kimi Nishino (西野 貴未, Nishino Kimi) is a former assistant for Akihiro Kanou who aids in his ghoulification experiments, the previous human lover of Nishiki Nishio and a medical student at Kamii University. Although she is aware of his ghoul nature, she remained loyal to him and kept his secret. After the Owl Suppression Operation, he left her in order to keep her safe.

Kimi is a young girl with short brown hair that has bangs styled in a hime-cut with the left side tucked behind her ear while a long hair strand hangs on the right side and brown eyes.

She is a normal casual college student who attends the same university as Nishiki Nishio, Ken Kaneki and Hideyoshi Nagachika. She wears two matching bangles that Nishiki also wears as a couple.

Kimi appears to have a calm and hardworking nature who is shown to be extremely loyal to Nishiki Nishio after he unknowingly helped comfort her after losing her family in an accident. She is also discreet on keeping a secret for her affiliations with Nishiki and Ken Kaneki, since helping ghouls (who are enemies of humanity) is a more severe offense than helping out human criminals.

Kimi also seems to be determined, she truly wishes for a world where ghouls will be able to live with humans. With her own will, she decided to aid in Akihiro Kanou's research. While she disagrees with his methods, Kimi acknowledge his expertise on ghouls and wants to acquire as much knowledge as he owns.

Kimi lost her parents and her younger brother in an accident. Around that time, Nishiki Nishio approached her and they started going out.[2]

Kimi found Nishiki Nishio in his apartment after he had been heavily wounded by Ken Kaneki. At that moment, she found that Nishiki was a ghoul. Nishiki attacked her, but he had to realize that the wounds had made him weaker than a human. Kimi allowed him to eat a bit of flesh from around her left shoulder, leaving a scar.[2]

After Ken Kaneki had saved Nishiki Nishio from ghouls in the 14th ward and brought him to Nishiki's apartment, Kimi attacked Kaneki because she mistook Kaneki for the "narcissistic man". Since Shuu Tsukiyama came to Kamii University, Kimi thought Tsukiyama was targeting Nishiki. She asked Kaneki to keep quiet about Nishiki, and in exchange, she would keep quiet about him.[4]

Later, Kimi approached Kaneki for help at Anteiku because Nishiki's wounds were not healing. Kaneki promised he would find a way to help her and Nishiki. On the way back, she was attacked and kidnapped by Tsukiyama.[5]

When Kaneki and Nishiki went to a chapel where Tsukiyama held Kimi prisoner, they found her tied to a table. After Tsukiyama explained his intention of eating Kaneki while Kaneki eats Kimi, Kimi remained idle until Touka Kirishima joined the fight and defeated Tsukiyama. After being untied by her rescuers, she noted Touka's kagune was very beautiful, surprising Touka.[6]

During the Anteiku Raid, Kimi was briefly mentioned by Nishiki Nishio who wanted to see her again before leaving.[7]

While Ken Kaneki and Hideyoshi Nagachika were talking about how good life was back then, a flashback showed with all of the people they cared about, and at a table, Kimi and Nishiki Nishio were wearing matching bracelets.[8]

In the aftermath of the Rushima Landing Operation, Dr. Akihiro Kanou gathered with his assistants and Okahira where he asked Kimi whether she had brought the research materials with her, which she confirmed.[9]

After Akihiro Kanou's suicide, Kimi and other assistants of Kanou came to the CCG building and revealed all of the information they and Kanou had collected relating to ghoul science, trying to assist in the suppression of Dragon. During this period, she reunited with Nishiki Nishio and they are still together. One of her dreams was encourage ghouls to eat human food by adjusting their palates, the other was to assume the Nishio surname. Eventually, after Humans and Ghouls began to cooperate under the United Front, she was one of the leading developers of a synthetic food that ghouls could eat, hence eliminating the need for human flesh. However, even after improvements, many ghouls still commented on how poor it's taste was.

Kimi is continuing her research on ghouls where one of her dreams is to regulate the sense of taste so that ghouls are able to taste human food and another dream of hers it to take on the Nishio surname.

Nishiki was the first to approach her, during their time at university. He first noticed her at school where she forgot her change in the vending machine. He wonders who she is and guesses that she is in fact a freshman. When approaching her, he noticed her paleness and states that she seems rather plain. Kimi in fact was depressed at that time due to the death of her mother, father and younger brother. She was scared of being lonely and not being able to see them again. She claims she would've preferred dying. Nishiki saved her from her loneliness and she is even willing to let him eat her. He does in fact bite her shoulder, but he doesn't eat her.

Nishiki is willing to sacrifice himself for her too. When she was kidnapped by Shuu Tsukiyama, Nishiki was ready to give his all to be able to keep her safe.

Nishiki means everything to Kimi. She wants to create a world where ghouls can live like humans, alongside with them. She is willing to work as Akihiro Kanou's assistant to achieve her goal.