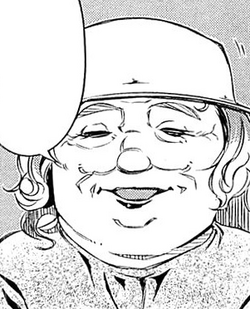 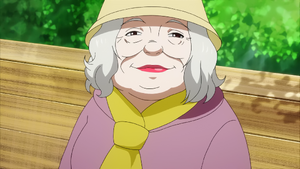 Juli Erickson
Kie Muramatsu (村松 キエ, Muramatsu Kie), more well-known as Applehead (アップルヘッド, Appuruheddo), is a minor character in Tokyo Ghoul. She was involved in over 50 murders in one year. Most strikingly, her head is red, shaped like an apple and covered with seams. This made the ghoul investigators think that this was the appearance of her mask, but in reality, she used a mask in her normal life that gave her the appearance of an old lady [1].

After Kureo Mado and Koutarou Amon had been teamed up, their first investigation concerned the ghoul "Applehead". Their main suspect was Kie Muramatsu, who was seen at one of the crime scenes. To prove her innocence, Muramatsu provided a medical certificate that showed that her Rc factor was that of a human. However, Mado realized that the medical certificate was fake. So he set up a trap: He pretended that Muramatsu was cleared of all suspicion and then waited for her to move again. When Amon met Muramatsu again, he offered her to help with the luggage. At the moment Amon realized that blood was seeping through one bag, Muramatsu attacked him.

After a short fight, Muramatsu was killed by Mado.[1]

Ghoul Physiology: Due to Kie's ghoul nature, she has increased physical capabilities where she has a Rinkaku kagune.