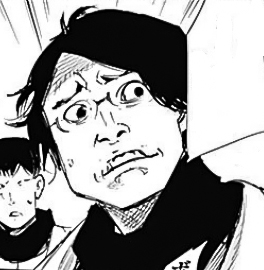 Jean-Luc Hester
Kenta Isai (伊佐井 健太, Isai Kenta) is a First Class Ghoul Investigator. He participated in the Auction Mopping-up Operation as the squad leader of the Isai Squad.

He is a short man with slightly disheveled hair and wears glasses. He usually wears the standard CCG uniform, or a smart suit.

So far his personality is unknown.

At the auction, he and his squad are separated from Mado Squad and are assigned to stop the ghoul Naki, who is accompanied by Miza.