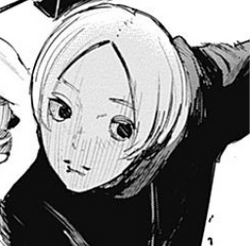 Ricco Fajardo
Keijin Nakarai (半井 恵仁, Nakarai Keijin) is a First Class Ghoul Investigator. He is the deputy squad Leader of the CCG's Suzuya Squad assigned to the 13th ward.

Nakarai is a short young man with light blond hair parted neatly in the middle and large, dark-colored eyes.

Nakarai has a tendency to show Suzuya his good side only, usually blaming his other squad members when at fault comically in the omake.

He is harsh when he is not dealing with higher-ups, calling Abara a "damn giant weakling" for being sick.

Nakarai participated in the Auction Mopping-up Operation along with the rest of his team. In the storage area of the auction hall, he assisted in subduing the SS-rated ghoul Big Madam.

With the rest of Suzuya Squad, he landed on Rushima and began exterminating ghouls.

During Juuzou's fight with Kurona, Nakarai and the rest of the squad came up behind Kurona but their attacks were blocked. As Kurona happily declared that she "killed" Juuzou, Keijin and the rest of the squad immediately assaulted the ghoul. Kurona noted how they were unusually calm, and then claimed that Juuzou was not important enough for them to mourn, while maniacally laughing. Hearing this, the whole squad burst into laughter, Keijin mockingly questioned Kurona if she really thought she killed Juuzou, while the latter sneaked up to her and attacked her from behind.[3]

Nakarai is engaged in TSC duties. As deputy dragon general, he supports Suzuya. After being seriously injured in the battle with Shikorae, he stepped back from the front line. He became the academy's supervisor under headmaster Kiyoko Aura, and he is infamously known as demon Nakarai.

Nakarai deeply respects his squad leader and is confident in his abilities. Together with Suzuya Squad, he laughed and disagreed when Kurona claimed that they do not consider Juuzou important enough for them to mourn. He tells Kurona that they selected Suzuya with a burning desire and doubted that Juuzou had died.

Swordsmanship: Nakarai's skill with a quinque is remarkable, being able to parry attacks of Kurona Yasuhisa, a SS-rated kakuja ghoul, and even sever her arms from behind along with the rest of his squad.[3]

Nakarai cuts Kurona's limbs from behind.